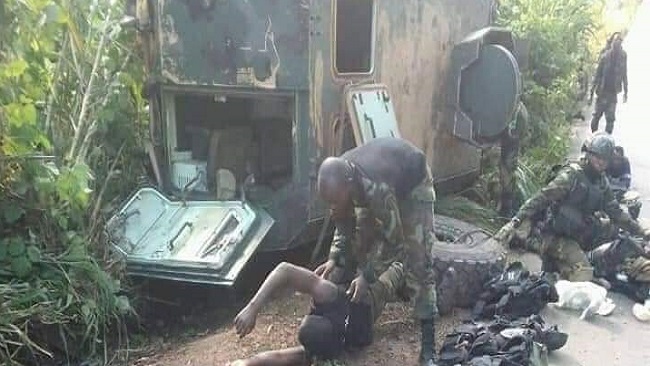 Three soldiers serving with the Rapid Intervention Battalion (BIR) and two deputy mayors including three councilors have been killed in an ambush by Ambazonia Restoration Forces in Oku in Bui County in Southern Cameroons.

The Eagle New Africa reported that Taal Timothy Babey and Babey Julius Ghoyume of Elak Council and three councilors from Oku were inside an armored vehicle returning to Kumbo after a political campaign when they came under an attack on the 28th of March that emphasises the growing insecurity in the entire Southern Cameroons territory.

Cameroon Concord News is yet to verify the correctness of the Eagle New Africa report but if the death toll is confirmed, is the deadliest on Cameroon army soldiers ever since the regime in Yaoundé succeeded in getting two corrupt Ambazonian front lines leaders; Dr Ikome Sako and Ebenezer Akwanga to commit to a coronavirus cease fire.

We gathered that a PhD student from the University of Dschang identified as Kedia Kenneth Buji and eight other members of the ruling CPDM crime syndicate were killed in the attack.

The Cameroonian military has not released casualty figures, but a senior official who spoke on condition of anonymity stated that the army was tired and fed up with the war in Southern Cameroons. He added that the Ambazonian fighters first targeted the driver of the armored vehicle before over-running its occupants.

Since 2016, Southern Cameroons Self-Defense Forces have carried out attacks against Cameroon government military installations and security posts in Southern Cameroons. The Francophone dominated military have failed to stem the violence. This year has also seen Ambazonia groups increase their presence in border areas in Manyu and Bui County.