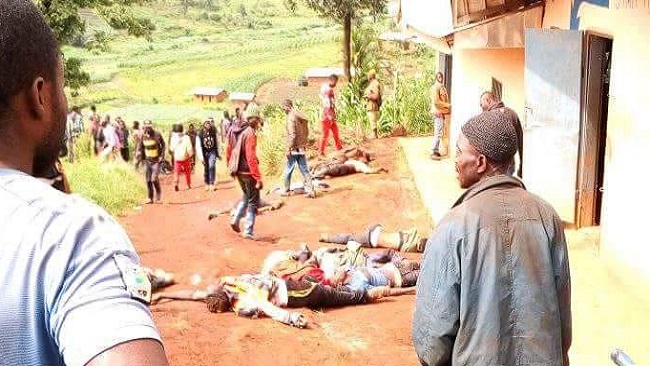 This needs someone who is heartless and inhumane to say let the Cameroon people resolve their own problems. This statement might sound reckless and inciting violence, but how does an unarmed person negotiate with the barrel of a gun pointed to his head? Maybe they need to be given guns to balance the negotiation because in this case there is no arbiter. The arbiter stands at arm’s length to ensure they do not get muddied by the blood of the uneducated, unsophisticated or those who claim they are too educated to dirty themselves with the details of a revolution and rewriting the wrongs of the past and present regimes including those who dare rise and question these practices.

When people talk about the ills of government it is blamed as regime change rhetoric and the influences of the west. But the west aint here and yet there is so much black on black violence by the government using the state organs and hiding behind rogue elements. The shooting of defenceless persons, serious beatings, gunshot wounds by the police and the military clearly show that Cameroon has failed to uphold the concept of sovereignty in the same way that Zimbabwe has, and many other African states.

The people we expect to protect the defenceless, the arbiters go into these countries and strengthen camaraderie relationships accusing people who are fed up of poor governance of being unruly opposition parties hell bent on destabilising the region or country. It is so unfair and unrealistic that we are being killed every day, killed by our own governments who are resorting to self-help to protect their bad governance and dictatorship. Assume the people were indeed unruly looters and promoting insurgence and traitors to the nation or rebellion against the fatherland, group rebellion and public disorder as per the charges levelled against Maurice Kamto, does not the state have lawful means of charging him and sending him to prison after a just trial without violating his rights? Why should soldiers be released on people and beat people working together with the police?

This has become a norm in Africa than an anomaly. We as the ADF take exception to the failure by the South African government seen as the big brother to condemn these actions but to actual send delegations in solidarity with such governments as seen with the ZANU and ANC meeting and the resolutions of that meeting. How can ZANU stop that abuse when the only African country that sits on the UN condones the butchering of people and such a violation of these fundamental human rights? South Africa is complicity in all the crimes that have been perpetuated by the various African leaders who have been killing their citizens with impunity and yet it has kept quiet and even shown such support for these people.

What is happening in Cameroon is the most gross violation of human rights that we can talk about and unfortunately it is not only happening there but across the divide of the continent and the AU is sitting over tea and coffee daily fraternising. The syndrome of passing the blame is seen again in Zimbabwe where ANC supports ZANU to blame sanctions for the killings. What caused the 1st August 2018 killings? What is causing the Cameroon atrocities? Clearly it must be the illegal regime change elements planted by the west? Please our leaders, do respect your people for once and take them seriously. We deal with serious problems of xenophobic attacks and we the ordinary people are fighting amongst ourselves over the meagre resources because the lion’s share is with our leaders. The people are suffering from the blunt consequences of this African rhetoric while the leaders are safe and protected and we are used as tools to kill each other. Who should we turn to? We flee these countries, our own heritage and the neighbours who watch in laughter and great disinterest to the plight of the poor men, also tighten their laws to ensure that we must go back to the burning furnace and in some cases they even incite locals to met street justice by killing these foreigners who are crowding and taking away the meagre resources causing poor service delivery is their pathetic line.

Our African leaders ae facilitating the spirit of divide and conquer so that the people of Africa do not come together but look at each other with great scepticism because they know that once the people come together and compare their notes a great revolt will overthrow and reject this mediocrity, looting and despotism across Africa.

We know that indeed we the people are nothing in the sight of the mighty giants, but our cry is for a small share of the loot, to live in peace and let them enjoy the loot without killing and maiming us. The situation in our African states, Cameroon, the DRC, Sudan, Zimbabwe and many that seem to have borrowed peace because elections are a distance off, is dire. We implore the AU, SADC and the United Nations to be true to the plight of the defenceless, the people. We cannot continue to allow bad governance to thrive while we hide behind state sovereignty and the principle of non-interference. It is this same kind of suffering and ostracization that led to our fathers standing up against the colonial regimes. We cannot afford to continue looking aside in the face of such inhumane raping, buttering, of people by soldiers and the police.

Do the people do not have rights? Or our rights are the right to be abused, killed, segregated against, right to suffer, to be uneducated, to be demeaned and dehumanised?  We therefore call upon the international community, the regional bodies and South Africa which has become home to so many migrants fleeing these atrocities to speak unashamedly against the brutality and violation of human rights in Cameroon. President Biya, is indeed a dictator who is holding the Cameroon people at ransom without leaving the Presidency. There is no one person more intelligent and superior than all others to rule over others alone and decide their fate. We live in an age of democratic constitutionalism which is being corrupted by our own leaders into perennial presidency without observed term limits.

The African Diaspora forum is saddened, appalled, ashamed, by the actions of those who are in a position to deal with these issues but instead choose to take the wrong side and join in on the oppression of the defenceless. We have many dying daily crossing the Mediterranean trying to flee to Europe and we ae not asking ourselves the million dollar question, why?