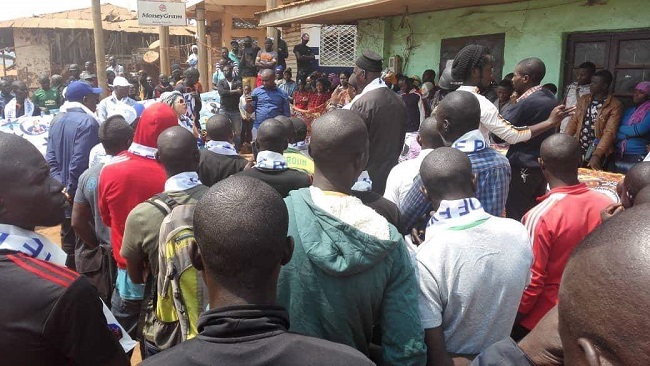 Interim Government of Ambazonia Statement on the Massacre

The Interim Government of Ambazonia Intelligence Services have now confirmed that our people were randomly arrested and shot at in the market square. In an act of utter barbarism, eleven civilians were massacred in cold blood. Amongst the slaughtered, are three children and a pregnant woman. Our thoughts and prayers are with their close friends and families.

In a replica of the massacre in Ngarbuh, Dunga Muntung, on the 14 February 2020, the French Cameroun military burned down homes and properties to cover their heinous crimes. Eyewitnesses report that people were burned alive inside their homes. Ambazonia Intelligence Services have now obtained photographic evidences of these crimes.

The action this morning not only constitutes a flagrant violation of Cameroon’s own law and international human rights laws, but contradicts the assurances of good faith that French Cameroun officials have given the international community after the publication of the report to the massacre in Ngarbuh, Dunga Mantung on the 14 April 2020.

Their choice to deploy the military at dawn after the disconnection of power and internet services is a clear indication of the mayhem and atrocities they intended to commit.

This act makes entirely clear that the Cameroon regime has deliberately sought to deceive the international community by false statements that they hope for a peaceful resolution of the conflict. World leaders must renew their commitment to stop the persistent and wholesale violations of fundamental human rights that our people have been subjected to for the past four years.

This week, Norwegian Refugee Council (NRC), stated that our crisis would worsen throughout 2020. The agency stated that for a second year running our crisis topped the list as the most neglected crises on the planet in 2019. This is extremely worrying and challenging for the people of Southern Cameroons.

Today, communicated Cameroon’s unwavering commitment to violence as the sole medium of resolving this conflict.  Ambazonians are opposed to war. We chose the universal symbol of peace, the dove with the olive branch, for our national flag. No matter how long it may take us to end the occupation, the Ambazonian people in their boundless determination will prevail.

Acting therefore to free our people from subjugation, domination, genocide, and in accordance with the International law of self-determination,

This is a treacherous and difficult journey we have embarked on. We have seen hundreds of our villages burned to the ground, thousands of our men, women and children shot dead for no other reason than belonging to our community.

No one can say for sure how much more suffering we will be subjected to by this regime. The price of freedom is always high. This time, we want real freedom and real peace.