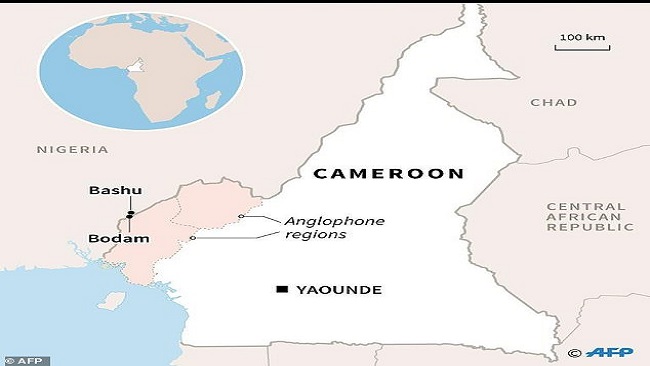 Namata Diteng, the deputy head of the anglophone Batibo district, has been missing since Sunday, when his burnt-out car was found in an isolated area

Cameroon’s army said on Monday that it was continuing to search for a local official after separatists in a restive English-speaking region claimed to have captured him.

Namata Diteng, the deputy head of the anglophone Batibo district, has been missing since Sunday, when his burnt-out car was found in an isolated area.

The leader of an anglophone separatist movement, Ayaba Lucas Cho, said on social media Sunday that his group had captured Diteng. There were numerous appeals by separatists online to “kill the prisoner” of the “colonial army”.

A week-long curfew was imposed on Saturday after separatists made threats on social media to disrupt the celebrations on February 11, the date a referendum was held in 1961 on whether the English-speaking regions would join French-speaking Cameroon.

Cameroon forces killed 23 assailants on Sunday in the southwestern village of Kembong, Badjeck said, in an attack in which three soldiers also died.

Badjeck said there was another separatist attack on a police station in Ekok, in the southwest of the country near the border with Nigeria, on Sunday night.

Members of the Cameroonian army and the Rapid Intervention Battalion (BIR) “routed the attackers”, he said, adding that “15 terrorists” were arrested in the area on Monday.

The bloodshed is the latest episode in an escalating crisis in the country’s southwest and northwest regions, home to an English-speaking minority that accounts for about a fifth of the population.

Many English-speakers have accused the francophone majority of discrimination and that has fuelled a separatist movement.

In October, the separatists declared the anglophone regions as the self-proclaimed republic of “Ambazonia”, prompting a forceful reaction by the government.