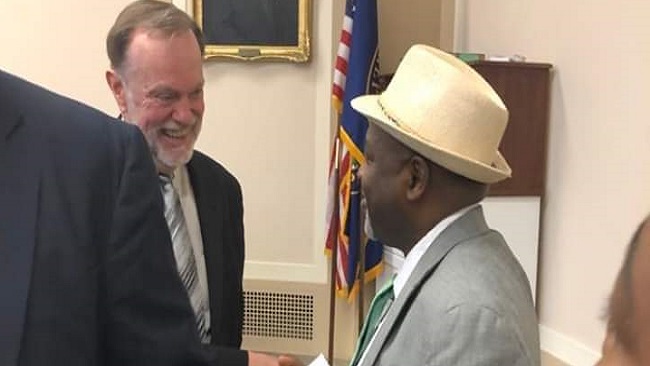 Senior officials of the Southern Cameroons Interim Government have held very intensive and productive discussions with the US Under Secretary of State Tibor Nagy.

Barrister Harmony Bobga- President of the Ambazonia Bar Association and Madam Victorine Bolinga-a leading member of the Diplomatic committee of the Interim Government of Ambazonia met the top US government official in Washington DC at the House briefing.

In the 19th November, 2019 presentation at the Sam Rayburn Hall at the US Congress in Washington DC on the current Southern Cameroons war of Independence, both Congress woman Karen Bass and Tibor Nagy reportedly briefed the committee on the raging war in Ambazonia.

Tibor Nagy told members of the committee that Paul Biya President of French Cameroun is being ill advised to pursue military options over negotiations and dialogue.  Tibor Nagy also said that French Cameroun Major National Dialogue was a failure and never inclusive and that each passing day many Ambazonians are being killed.

The US Chief diplomat equally said the controversial so-called Swiss Dialogue Process should be welcome by French Cameroun.

Tibor Nagy held talks with Barrister Harmony Bobga and Victorine Bolinga two emissaries from President Sisiku Ayuk Tabe and reassured them of the commitment of America to find lasting solutions to the raging conflict of self determination between Southern Cameroons and French Cameroun.