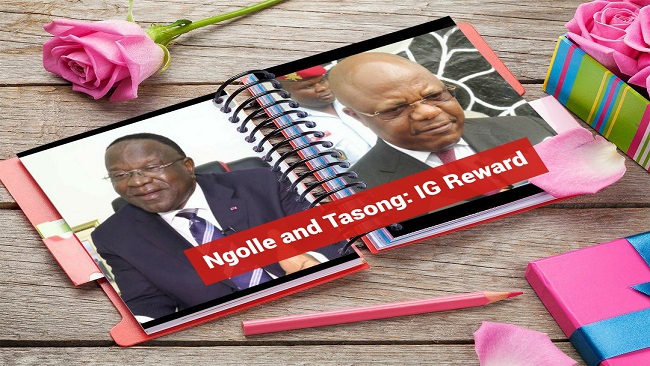 The Southern Cameroons Interim Government (IG) has finally put a huge price on the heads of some members of the ruling crime syndicate also known as the CPDM.

A source close to the IG has revealed to the Cameroon Concord News Group that Paul Tasong and Elvis Ngolle Ngolle each have USD 200,000 on their heads.

The source, which elected anonymity, said the two Southern Cameroonians, who have given up their nationality and are serving the Yaoundé government as consultants, are still seeking to influence life in Southern Cameroons.

The source added that the IG is particularly upset with Elvis Ngolle Ngolle who is working very hard to demonstrate that there is no problem in Southern Cameroons and has been giving the newly minted country a bad name by speaking very bad English.

The price on Ngolle Ngolle was put when he decided to head to Kupe Muanenguba in an armoured car to campaign for the enemy.

His action was viewed as a gross violation of the 2017 death penalty issued against any enablers of the corrupt Yaoundé government.

Mr. Paul Tasong is also accused of similar offenses and he will surely be picked up like his friend Professor Lambo who was picked up and kept in protective custody in one of the beautiful green jails of Southern Cameroons in 2018.

“The IG is very serious. It has ordered its troops to only engage in hit and run tactics for now to minimize civilian casualties,” the source which lives in Amsterdam said.

“The IG is determined to keep the heat on those infidels until they crack. The IG will, in the days ahead, announce new effective measures which will make the arrest and physical elimination of these enablers very possible,” the source added.

“The corrupt Yaoundé government is holding our leaders in their dungeons and it is in no hurry to liberate them. We are gradually transiting from soft tactics to very harsh tactics which will include physical elimination of so-called CPDM militants in Southern Cameroons,” the source underscored.

“We will stop at nothing when it comes to the liberation of President Julius Ayuk Tabe and his collaborators. We are no longer interested in the government’s version of dialogue. The Biya government which is on its last leg lies through its teeth and speaks from both sides of its mouth. It cannot be trusted and we are convinced that the only things it understands are an iron fist and a tough language,” the source stressed.

“We must hit the dying government where it hurts the most. High value targets remain our focus, but we will continue to turn the heat on those low-class, ill-behaved commoners who pass off as chiefs and fons who have sold their souls to the devil for food and drinks. They are all bereft of integrity and they don’t deserve to walk on our land,” the source said.

“Some of them are not even worth the bullets our fighters use. Many of them will even die like the chief of Dibanda who cheated the Southern Cameroonian justice system by dying even before he was questioned. His financial desperation and stress coupled with his reckless lifestyle had reduced him to a bag of bones. His health woes were known to his family though some dishonest imbeciles are seeking to pin it on our effective and professional law enforcement officials,” our source pointed out.

“These chiefs and fons are supposed to be apolitical, but hunger and financial desperation have pushed them into the waiting arms of the corrupt Yaoundé government. Ever since the Yaoundé government started paying them stipends, many of these chiefs and fons have abdicated their responsibilities and the only thing that pleases them now is for them to attend CPDM rallies in their dirty traditional attires,” the source said.

“They must choose between doing their job objectively or attending those rallies organized by the notorious crime syndicate that has been in power for 38 years with nothing of value to show for such a long stay in power,” our source said.

“Maybe they want to end up like chiefs Tabetando who is also moonlighting in Yaoundé as a senator, Dion Ngute who has willfully accepted the death penalty by taking up his current function, Edward Ako of Ossing who is suffering from acute insomnia due to morbid fear of Southern Cameroonian fighters. He seems to be wearing a crown of thorns and he has lost his smile ever since he made that trip to Ossing under police escort. For Chief Ayuk Hope, his fate is sealed and for more than a year, he has been without a fixed address ever since he skipped town because he could not come up with the modest CFAF 1,000,000 Amba levy. Some chiefs like Tabetarh have been quiet for a long time, but we will like to know their position on this matter. We know he has been collaborating with the enemy behind the scenes and has never paid any levy,” the source said.

“As far as we are concerned, silence is acquiescence in this situation. It is simply not golden in this context. Our people are dying and the living are living rough. More than 700,000 Southern Cameroonians are either internally or externally displaced. Zipping his lips does not make him a responsible chief. The ball is in his court,” our source said.

“Of course, they know their fate. Those who still have doubts can check with the Fon of Babanki who returned home yesterday after posting bail. He might not talk in public due to the agreement he signed and he knows there are special eyes on him. However, he can share his experience with his fellow fons and chiefs for them to adopt the appropriate conduct. The Fon of Kumbo also knows how things get done when you violate the people’s law. He is a treasure trove of information for any Fon who is still hungry and is in denial,” our source concluded.