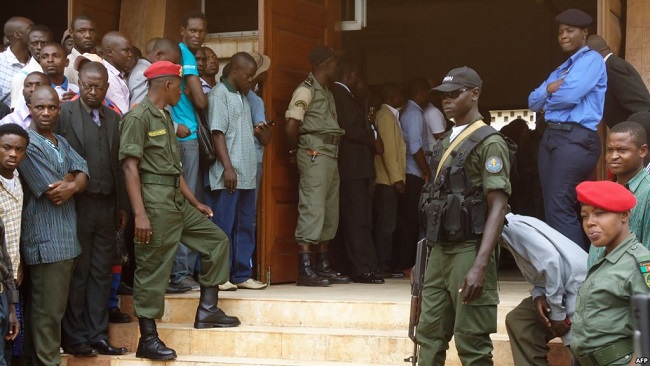 A Cameroonian anglophone separatist leader was in court on Thursday, in his first public appearance since he was extradited from Nigeria in January, amid spiralling violence in English-speaking areas.

Sisiku Ayuk Tabe, who wants Cameroon’s two anglophone regions to separate from the French-speaking part of the country and last year spearheaded a symbolic declaration of independence, appeared with nine other defendants at a brief hearing in the capital Yaounde.

“This day is a big day because all (ten) defendants were there,” lawyer Me John Feu Nsoh told reporters after the court appearance, which was about the group’s petition to be freed.

Ayuk Tabe, who pronounced himself the president of a new republic called “Ambazonia” in October 2017, was arrested with 46 others in Nigeria and extradited in January.

Cameroon has called the 47 “terrorists” and said they would “answer for their crimes”, as tensions mount in the Southwest and Northwest Regions, home to most of the country’s English-speakers.

Three lawyers filed a motion for the “immediate” release of ten of them in October, including Ayuk Tabe.

On leaving the courtroom the group waved at relatives held at a distance, before getting into a police bus, according to AFP.

English-speaking separatists complain of discrimination at the hands of the French-speaking majority in education, the justice system and the economy in the largely francophone central African nation.

The government has refused to engage in dialogue with separatists and has sent forces into the area to restore order.

The unrest has worsened this year, claiming the lives of more than 400 civilians and an unknown number of separatists in the year to September, according to the International Crisis Group think-tank.

More than 300 000 people have fled the violence, some to neighbouring Nigeria.