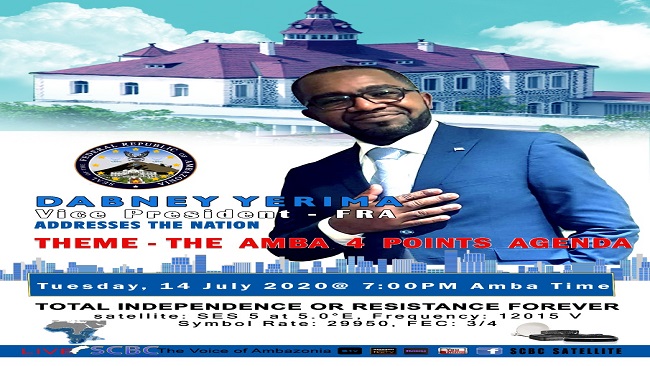 Vice President Dabney Yerima will address Southern Cameroonians today on SCBC TV. A spokesman for the exiled leader made the announcement of the Vice President’s impending broadcast in a statement.

“Television, radio and other electronic media stations are enjoined to hook up to the network service of the Southern Cameroons Broadcasting Cooperation (SCBC) for the live broadcast.”

Cameroon Concord News Group understands the Vice President’s address termed the ‘The Amba 4 Points Agenda’ will focus on the Southern Cameroons struggle that has reached a point of no return.

Mr Yerima is expected to caution some frontline leaders of the Ambazonia struggle against internal disruption and misrepresentation of the leadership in French Cameroun detention centers. Comrade Yerima will drive home the point that “Any leader who says one thing in private and propagates a different narrative to the public is not doing our nation justice.”

Vice President Dabney Yerima, who has persistently called for a United Nations Independent Fact Finding Mission to investigate the atrocities of the French Cameroon military in the Federal Republic of Ambazonia, will salute the indefatigability of Southern Cameroons Self-Defense forces and will of course commit to provide them with all the hardware needed to seal victory in the conflict.