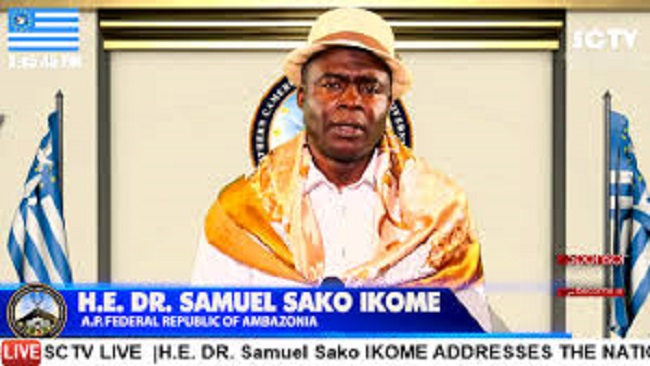 The leader of the Ambazonian Interim Government has called on Commonwealth member states and the United States government to break their silence on Yaoundé’s widening crackdown, led by the 85 year old dictator Paul Biya, against Southern Cameroons civilian population and intellectuals.

Speaking exclusively to Cameroon Concord News Group, Acting President Ikome Sako said “Commonwealth member states and the Trump administration must end their deliberate silence on French Cameroun and do their duty of scrutinising the genocide and cruelty against the Ambazonian people and to intervene and prevent further outrageous human rights violations.”

President Sako added that “The French Cameroun government’s long-standing repression and killing of innocent Southern Cameroons civilians , exemplified by the shooting to death of an American missionary in Bambui has until recently been wilfully ignored by the US and the Commonwealth of Nations.”

Dr Ikome Sako further observed that “The gruesome death of Charles Wesco Trumman has shown how far the French Cameroun political elites with the support of France will go in their repression and crackdown which has only intensified ever since the abduction of the exiled Ambazonian cabinet in Abuja, Nigeria.”

The Southern Cameroons acting leader also urged Commonwealth member states and Washington to show solid scrutiny and demonstrate strong action more than ever against Yaoundé.  “The EU, AU and the UN all have a duty to hold the Biya regime to account for its relentless genocidal campaign in Southern Cameroons.”

The International Crisis Group and Amnesty International have also appealed to European countries with considerable influence on the government in Yaoundé to do everything in their power to prevent further killings of Anglophone citizens. Human rights groups have also urged Yaoundé to dialogue with the Southern Cameroons leadership and proceed with the immediate and unconditional release of all prisoners of conscience, including Sisiku Ayuk Tabe and members of his cabinet.

The Biya Francophone regime launched a senseless devastating military campaign against Southern Cameroonians on lame and ridiculous reasons that it was fighting separatists and wanted to crush the Southern Cameroon’s popular Cameroon Anglophone Civil Society Consortium. The French Cameroun war has so far claimed the lives of around 4000 Southern Cameroonians.

The President Biya war has also taken a heavy toll on Southern Cameroon’s infrastructure, destroying several towns and villages including hospitals and schools. The UN has already said that a record 50,000 Southern Cameroonians have fled to neighboring Nigeria and some 161,000 internally displaced are in dire need of food and medicine.