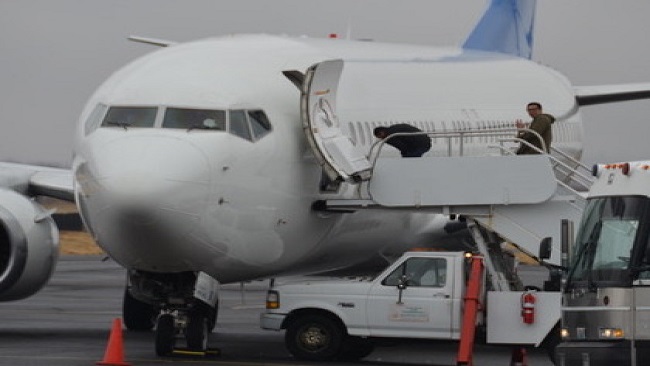 Ambazonians sought refuge from violence in the U.S. The Trump administration is sending them home in death planes 0

They fled political imprisonment, torture, rape and the threat of death in Cameroon, made their way to South America then up to the U.S. border to make what they thought would be a clear case for asylum. Now they are awaiting imminent deportation on what their lawyers refer to as “death planes” because of the high likelihood they will be killed by their government upon return.

NBC News reviewed documents submitted in the cases of three Cameroonians who are now facing deportation after their asylum cases proved unsuccessful. They are among more than 1,500 Cameroonians who applied for asylum in the U.S. this year, nearly double the number who applied in fiscal year 2019, despite COVID-19’s downward impact on overall immigration.

The pleas for asylum are growing because conflict between Cameroon’s government and the African nation’s English-speaking minority, known as the Anglophones, has grown in recent years, as has the risk of violence against the Anglophone population. But during the Trump administration the percentage of cases in which Cameroonians win asylum has dropped from 80 to 54. The decline is in large part due to tough immigration judges appointed by the Trump administration and new policies that raise the bar on what it takes to prove and qualify for asylum, according to immigration attorneys and Democratic members of Congress.

“These people are fleeing political persecution. It’s the very reason we have an asylum system in the first place,” said Sen. Chris Van Hollen of Maryland, who, along with three other Senate Democrats and 81 nonprofit organizations, has asked the Trump administration to halt the deportations of Cameroonians.

“The United States has a moral obligation not to turn our backs on civilians fleeing from conflict. These individuals are targets for both government forces and armed separatist groups. Allowing their deportation under these circumstances would place their lives at risk,” the senators said in a letter to Acting Homeland Security Secretary Chad Wolf on Wednesday.

Meanwhile, a 35-year-old Cameroonian named Justice Bantar in ICE detention is figthing to get his case heard by an immigration judge, according to his lawyers. Despite presenting evidence, including photos of scars from being hit on the bottom of his feet, Bantar was not able to make his case in immigration court that returning home was a risk, because an asylum officer did not find he had a “credible fear of persecution” if he were returned, the first bar in establishing asylum.

In a phone interview from ICE detention with NBC News on Oct. 16, Bantar said he was scared for his life and worries he will be detained and killed on his return. His lawyer, Joseph Giardina, submitted photos and sworn affidavits from his friends and family, laying out the story of how Bantar was taken prisoner after he rescued his sister from kidnapping by separatists.

The military questioned Bantar about the location of the separatists, beat him and detained him for four days with no food, according to the statements of friends and family. During those four days he was tortured with electric cables and wounded under his feet. He escaped prison with the help of an English-speaking guard, but his family soon decided he should flee the country to save his own life, according to testimony submitted by Giardina on Bantar’s behalf.

But it was not enough to get Bantar in front of an immigration judge. David Leopold, former president of the American Immigration Lawyers Association, said Bantar’s “statements and supporting affidavits articulate a protected group, e.g. persecution on account of political opinion or membership in a particular social group,” which is needed to establish a case for asylum.

In rejecting asylum for another Cameroonian Anglophone man awaiting deportation from the U.S., the Bureau of Immigration Appeals said he “was apparently not chased” when he escaped the prison where he had been held and tortured for 28 days. The man, who asked for his identity to be withheld from publication, had been arrested by Cameroon’s military on suspicion of hanging anti-government posters. When he escaped, the military went to his house, mistook his cousin for him, and shot and killed his cousin, according to documents he submitted in U.S. immigration court.

“This is stunning,” Leopold said, upon reviewing the case. “He detailed the manner in which he was beaten, indeed tortured; forced to lay on the floor as soldiers hit him with batons and leather ropes.”

“Here it looks like the immigration courts cherrypicked facts to get to a denial,” Leopold added.

The man told NBC News he traveled more than eight months to reach the United States.

“I heard the U.S. is one of the best countries for human rights protection. I was so happy when I arrived that I could be protected. My government said they were going to kill me. I knew if I could come here, I would be protected and my life would be saved.”

Now, facing deportation, he said, “I’m afraid my life will be taken away. It hasn’t been long since they harassed my family because of me. Others who have been deported or gone through the same situation, many of their families don’t even know where they are. I am likely to be killed.”

The man’s lawyer, Ruth Hargrove, said her client would be deported on a “death plane” because of the almost certain execution he would face upon return to Cameroonian authorities. She said there is a warrant out for his arrest in Cameroon.

In a third case reviewed by NBC News, a Cameroonian woman was denied asylum after an immigration judge said her testimony was “very vague.”

“With respect to her injuries after the … incident, the respondent stated that she was hospitalized for eight days. However, she was not able to give the court any specific information about the reason for such a long stay in the hospital, other than she was admitted because she was raped,” said Judge Meredith Tyrakoski.

NBC News previously reported on Cameroonian asylum seekers being pulled off a deportation flight as the Department of Homeland Security investigates allegations that they were forced to sign their deportation papers through intimidation and physical brutality.

The Trump administration recently announced its refugee limit for the upcoming fiscal year will be 15,000, a historic low.

The Departure of Homeland Security and Department of Justice, which oversees immigration courts, did not respond to requests for comment.