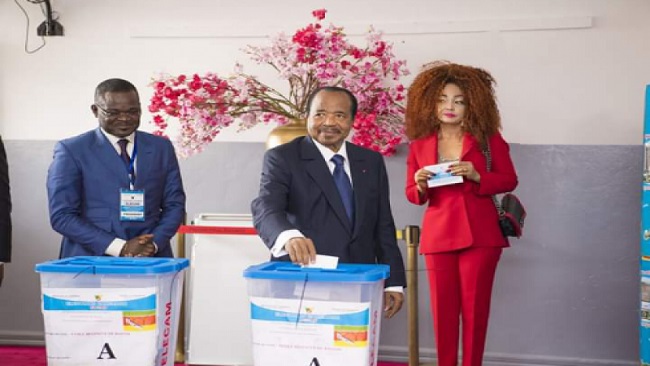 Following the February 09 Municipal and Legislative elections, an avalanche of calls for political breakthrough in Cameroon have been downloaded from several national and international bodies including the African Union (AU), Human Rights Watch (HRW), the Roman Catholic Church as well as a host of other rights focused institutions.

According to the AU observer mission dispatched to monitor the Cameroon elections, there was massive boycott as many Cameroonians have lost faith in the entire process. Moreover, the boycott launched by the main opposition party, the Cameroon Renaissance Movement (CRM) also worked to the disfavor of the elections. This further compounded by the ongoing conflict in the Anglophone regions which thwarted the process. It was a similar message from the Catholic Church which said something more than just elections can bring stability in Cameroon. According to the President of the Cameroon National Episcopal Council, Mgr Abraham Kome, the turnout was very low. He cited a case in President Biya’s home town of Sangmelima wherein in a polling station of 310 voters, only 85 bothered to take part in the process.

The armed conflict in Anglophone Cameroon also featured in the report of Transparency International (TI) as well as Human Rights Watch (HRW) and a general loss of confidence by citizens in the electoral process in Cameroon. This explains why even in urban metropolis void of any real armed conflict like Bertoua, capital of the East region, the abstention rate, according to the Catholic Church was 70% and in neighbouring Batouri, it was 89%. However, the government has challenged the reports arguing, through Cameroon’s Minister of Interior, Paul Atanga Nji that the reports do not reflect the reality on the ground. The Minister upheld that there was a huge turnout by Cameroonians. “The population in the North West and South West regions turned out massively to exercise their civic duty in all administrative units,” Atanga Nji said.

Amidst the current insecurity, violent conflict, voter apathy, elections boycott, disenfranchisement in Cameroon are three basic school of thoughts with each holding firm to an unshakable position characteristic of an extremist confluence. Proponents of the school of thoughts hold firm to their position and belief it is the best remedy for a country challenged at all fronts. In the opinion of the Director of the Central African Network of Human Rights Defenders known by its French acronym as REDHAC, Cameroon is challenged at all fronts and the ruling elites need to make some concessions. “The country is very sick at all levels,” Maximilienne Ngo Mbe said.

With each school of thought blaming the other for the current situation, it becomes a huge challenge finding a middle belt wherein all can come in. At the level of the government, the insecurity, violence especially in the Anglophone regions is caused by “enemies of peace.” They argue that before the uprising the country was enjoying “peace,” a “peace” which the retired Archbishop of Douala, Cameroon’s biggest town, Cardinal Christian Tumi described as “negative peace” because of the social inequality the ruling elites have subjected a greater part of the population and especially the minority Anglophones.

In the opinion of politicians including President Biya’s runner-up at the October 2018 election, Professor Maurice Kamto of the CRM party, they orchestrated a boycott because one part of the country (Anglophone regions) is in war and elections cannot be free and fair. They also argue that the electoral code which has been a subject of controversy in previous elections must be revised to provide equal opportunity to all, not just ruling party candidates.

On the part of the separatists, the elections are “foreign” to their land as there is no treaty in international law or at the level of the United Nations binding the Former British Territory (Anglophone Cameroon) and the Republic of Cameroun (French). According to them, the marriage between the two Cameroons in 1961 was an annexation scheme which they want to break. They hold firm to their position and argue that only a negotiated settlement would stop their arms struggle. In a recent outing on his Facebook page, Dr Ayaba Cho Lucas, one of the main leaders of the armed Anglophone nationalism advocating for a separate state called Ambazonia has urged his counterparts to arm what he called ground zero until the central government negotiates. Rather, the government has been slow to negotiate or address the underlying causes but has also upheld the extremist vision of peace by non-peaceful means. In his traditional end of year speech on December 31, 2019, President Paul Biya called on separatists to lay down arms or be crushed by the Cameroon defense forces. All these positions have ensured that there is violence, bloodshed and voter apathy not just in the Anglophone regions but the entire country before, during and possible after if sustainable peace is not attained.

Before, During, After Elections

Cameroonians went to the polls in the context of growing insecurity and conflict which has affected at least six out of its ten regions. The East is heavily militarized because of the incursions of rebels of the Central Africa Republic (CAR), while the North is embedded in the Boko Haram conflict, which after experiencing a lull, has, in recent times, taking a more ferocious mood with regular attacks and killings. The Adamawa region only enjoyed a respite of peace in recent times thanks to the dispatching of hundreds of elite Gendarmes to counteract the activities of kidnappers.

However, the greatest challenge has come from the two Anglophone regions in the West where separatists have been fighting against state security forces for three years. The state’s authority in those areas has been reduced to some rare urban metropolis with the few administrators still present under heavy military companion. In the October 2018 presidential election, the turnout in some of these areas was as low as 5% and in other cases entire population had fled because of the violence.

In its analysis of the situation, HRW said there was violence before, during the elections and possible after the election as it fears for the safety of those elected. This violence was orchestrated by both separatist fighters and government soldiers. The rights organization estimated that separatists kidnapped about 100 persons, mostly aspiring MPs and Municipal Councils, mainly from the opposition Social Democratic Front (SDF). At least three offices of Elections Cameroon (ELECAM), the elections management body were burnt down in Misaje on January 07, and Babessi on January 16 in the North West region. In the same region, a local Post Office in Bafut which was housing electoral materials was also burned down. In the South West region, ELECAM’s offices in Tombel were set ablaze on February 02. Homes belonging to government officials and some opposition party candidates were also destroyed.

Rather than protecting the population, HRW argued that government forces also worsened the situation by committing acts of human rights violation. Between January 17 and 20, security forces entered Bali, a locality in the North West region destroying over 50 homes and killing several individuals. All these according to the group accounted for the massive boycott in the elections especially as separatists who controlled most of these areas had called for massive boycott coupled with similar boycotts from some opposition parties including the Kamto’s CRM and the Cameroon Peoples’ Party (CPP) of Kah Walla among others.

The war has crippled the country’s economy as the two Anglophone regions are harbingers of much of the country’s wealth including crude oil, cocoa, coffee, banana, tea, and other cash crops. The largest agro-industrial complex, the Cameroon Development Corporation (CDC) which is the second largest employer after the state is at the brink of collapsing because of the war. This has pushed the government into a borrowing spree to finance most projects while some are merely abandoned because of lack of funds.

Even though regime faithful paint a favourable socio-political climate, the recent elections have proving that Cameroon needs a total overhaul of its electoral law, constitution and strong laws that would give more powers to the local tax payers. However, such a revision would still leave one part of the population, the English speakers disenfranchised as the conditions on the ground for them goes beyond the electoral code, but the transformation of the conflict into gains. Moving forward with elections in the present context has further strengthened the argument of separatists and instead put the lives of civilians.

Force has not solved the equation after three years and not even the country’s elite forces have been able to outsmart civilians sometimes holding just rifles. While addressing the American Parliament in November 2019 on the situation in Cameroon, the Deputy Secretary of State in charge of African Affairs said President Paul Biya has been “ill-advised” to use military options which cannot produce any substantial results. “You can’t wipe out a thought militarily,” Tibor Nagy said. He went further to state that the inability of the Cameroon government to enter into genuine negotiations with separatists further radicalizes many more to consider that only an armed struggle would answer the equation. In the inability to confab with separatists for the past three years, only unbearable pressure by the international community can cause the government to make this bold step and save what is still left. The growing dissatisfaction among the majority Francophones as expressed in the low turnout in the election is an indication that Cameroon in general is at the brink of a total collapse and possible repercussions going far beyond its border. Such a breakdown would for example fasten the position of Boko Haram extremists in the North and other armed movements.

Source: The Organisation for World Peace