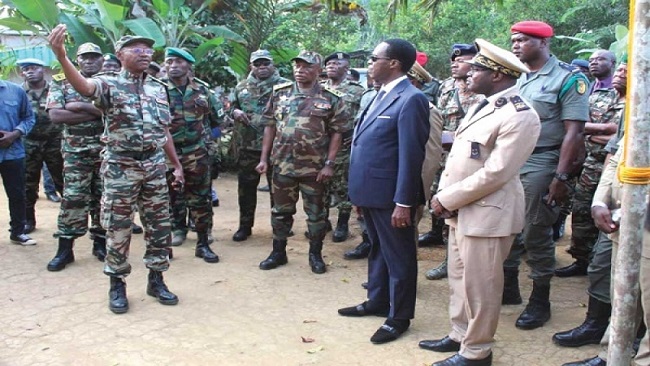 The arrests, arbitrary detentions and prosecutions in military courts of opposition members who were peacefully gathering are the latest example of Cameroonian authorities’ crackdown on dissenting voices since late September, the rights watchdog said in its recent report on Cameroon.

According to the report, at least 500 people were arrested on 22 September, the majority of them members of the opposition Movement for the Renaissance of Cameroon (MRC). Of those, 160 remain in detention, 13 have been sentenced to prison by civilian courts, and 14 appeared before a military court.

“The harsh repression of opposition and dissenting voices shows no sign of relenting in recent months. People simply exercising their right to freedom of peaceful assembly and demonstration have paid a high price with prison terms based on trumped-up charges,” said Fabien Offner, Amnesty International West and Central Africa researcher,” the report says

“The authorities must immediately put an end to the mass arbitrary arrests and detentions and immediately release prisoners of conscience,” the rights watchdog urged.

Protests were scheduled on 22 September by the MRC in several towns, but they were banned by the authorities which waged a campaign of arrests and arbitrary detentions of MRC supporters.

According to the lawyers, at least 160 arrested people remain in detention as of 25 November, in the towns of Douala, Yaoundé, Bafoussam and Nkongsamba. The lawyers have filed applications for their release 45 times but were rejected each time.

Eight people have been sentenced to two years in prison on 17 November by the court of first instance of the town of Mfou (Center) which found them guilty for « gathering, assembly and public demonstrations, and rebellion in group”.

Five other people have been sentenced on 6 November to four months in prison in the town of Nkongsamba (West) for attempt of public demonstration.

The rights watchdog chided the Yaounde government for misusing military courts just to hurt its opponents. Fourteen people arrested on 22 September were prosecuted by the military court in Bafoussam (West) between 24 and 25 November, for “attempted insurgency and unauthorized public demonstration and gathering “.

One of the defendants was also prosecuted for “contempt to the President of the Republic” and for holding “two signs calling for the departure of President Biya’’.

At least 45 other MRC members also arrested on 22 September were convicted of “attempted revolt”, “rebellion”, “aggravated assembly” and “lack of national identity card’’ by the Yaoundé military court, which placed them in pre-trial detention. Those imprisoned include Olivier Bibou Nissack, Maurice Kamto’s spokesman, and Alain Fogue Tedom, national treasurer of the MRC.

In Yaoundé, Awasum Mispa Fri, president of MRC women’s group was arrested on 21 November and charged by a military court with “complicity in revolution and rebellion” after demanding the end of Maurice Kamto’s house arrest along with dozens of other women. She was put in pre-trial detention. Kamto’s house arrest took effect on 22 September and was lifted on 8 December.

In a separate incident, four members of the movement, Stand Up for Cameroon, very active in the anglophone regions, were arrested on 18 September by the gendarmerie in Douala after attending a meeting at the headquarters of the opposition Cameroon People’s Party. They are still in pre-trial detention after being brought before the Douala Bonanjo military court, which charged them with “attempted conspiracy, revolution and insurrection”.

“Military courts should in no way be competent to try civilians as reminded in the guidelines and principles on the right to a fair trial of the African Commission on Human and People’s’ rights,” said Fabien Offner.

Amnesty International also called out the government in its handling of the Southern Cameroons crisis. It stressed that the Killing of eight schoolchildren in Kumba was a new low in  the devastating Anglophone crisis, urging the corrupt regime to protect ordinary people.

“The killing of eight schoolchildren inside their classroom is an atrocity that underscores the urgency of protecting ordinary people from the ongoing violence in Cameroon’s Anglophone regions. This horrific attack shows how badly the situation is deteriorating and we call on Cameroon’s authorities to immediately take all possible measures to protect the population,” it urged.

“At least 12 other schoolchildren were injured in the attack. Over the past year there has been a surge in attacks in the Anglophone region, with many people killed, abducted or injured. The Cameroonian authorities must send out a strong and clear signal that such appalling crimes will not be tolerated, by immediately investigating these killings. The perpetrators must be identified, arrested, prosecuted and tried in a fair trial. We also call on authorities to guarantee at all times and in all places the free exercise of the right to education, which is under threat,” the report said.

The police arrested Wazizi, 36, an English-speaking journalist at the privately owned broadcaster, Chillen Muzik and TV (CMTV), on August 2, 2019 in Buea, South-West region, and transferred him to a military-run facility in the same city on August 7. On June 2, 3, and 4 Cameroonian and international media, as well as Reporters Without Borders and the Cameroon Trade Union of Journalists reported that they had learned Wazizi had died in custody following torture, on an undetermined date.

“We are still shocked that authorities disappeared Wazizi and then covered up his death for 10 months, but we welcome the opening of an investigation and call on Cameroon’s government to make its findings public and ensure that all those responsible are brought to justice,” Mr Felix Agbor Nkongho, also known as Agbor-Balla, President of the Centre for Human Rights and Democracy in Africa (CHRDA) and a human rights lawyer said.

Wazizi’s transfer to the military facility on August 7 was the last time any of his family, friends, colleagues, or lawyers saw him, or learned anything of his fate from the authorities, making his continued detention an enforced disappearance. He was accused of “collaborating with separatists,” but his lawyers say he had not been charged with any offense before his disappearance.

The French Ambassador to Cameroon told the media on June 5 that President Paul Biya had assured him that an investigation would be opened into Mr. Wazizi’s death. The declaration was made the same day that the military spokesman, Colonel Serge Cyrille Atonfack, announced that Wazizi had died of severe sepsis on August 17, 2019 at the military hospital in Yaoundé, Cameroon’s capital. No autopsy was performed, and it is not clear on what basis Atonfack made the statement.

Cameroonian authorities had not made any official statement about the death of Wazizi, nor had they responded to multiple request for information filed by his lawyers, international media groups such as Committee to Protect Journalists (CPJ) and other journalists from Radio France International until June 5.

“It took the government 10 months after Wazizi was forcibly disappeared to acknowledge he died in custody, and authorities did so only following significant national and international pressure,”  Cyrille Bechon of the Cameroonian rights organization, Nouveaux Droits de l’Homme, also said.

“Cameroonian authorities were responsible for his life and safety while in detention and must provide a full accounting as to the circumstances of his detention and death,” he stressed.

Atonfack said that Wazizi’s family had been informed about his death, but family members refute that, saying they were never told and had been seeking information on his whereabouts since his arrest.

On August 13, 2019 Wazizi’s lawyers filed a habeas corpus application before the president of the high court of the Fako division, Buea, South-West region. The application was dismissed on technical grounds. Another habeas corpus was filed on November 13, but even then, the government did not disclose that he was dead.

When he announced the death, Atonfack also alleged that Wazizi was active in one of the several separatist groups operating in the South-West region. His lawyers said that no evidence had ever been produced to support the accusations.

“If a person is arrested under the anti-terror law, due process should be followed, and evidence brought to court,” said Emmanuel Nkea, a defense lawyer. “But this has never been the case and the government is trying to cover up the facts.”

The circumstances of Wazizi’s death underscore the dangers faced by Cameroonian journalists, particularly those who report on and investigate the crisis in the Anglophone regions of the country. The organizations have repeatedly documented the vulnerability of reporters in Cameroon to harassment, intimidation, threats, torture, arbitrary arrest, and detention by Cameroonian security forces and authorities.

Under national and international human rights law, Cameroon’s authorities have an obligation to account for every death in custody and should conduct an effective, thorough, and independent investigation into Wazizi’s enforced disappearance and death.

The investigation should be capable of establishing the facts surrounding Wazizi’s disappearance and death, including whether he died following torture or other ill-treatment in custody, and identifying all those responsible with a view to bringing them to justice. Failure to investigate and prosecute those responsible would violate Cameroon’s obligations to protect people from arbitrary detention and deprivation of life and to provide an effective remedy, the groups said.