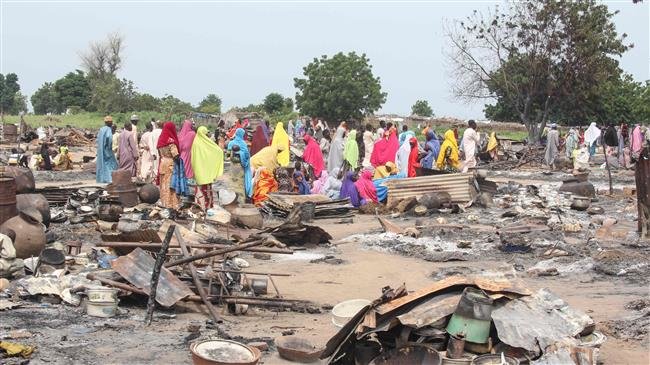 Amnesty International urges the International Criminal Court (ICC) to launch a full-blown probe into the atrocities committed by both the Boko Haram terrorists and the Nigerian military during the militancy campaign in the African country, criticizing Abuja for not doing enough to bring those responsible to justice.

The UK-based human rights group said the Abuja government was keeping ICC chief prosecutor Fatma Bensouda “in limbo” by giving the impression of domestic action on the crimes perpetrated by both the Boko Haram terrorists and the Nigerian troops, but it is in reality doing very little on the matter.

Bensouda had opened a preliminary examination in 2010 into cases of war crimes and crimes against humanity during Boko Haram’s campaign, which had begun a year earlier. Six cases relate to the militants and include the killing of civilians, mass kidnapping, attacks on schools and places of worship, sexual violence, plus the use of children in conflict.

The other two — involving attacks on civilians, mass arrests and detention of suspects, abuse, torture and summary executions — concern the Nigerian military. “Eight years since the opening of the preliminary examination and faced with the continuing commission of crimes under international law and the possibility of a never-ending preliminary analysis, it is time for the OTP (Office of the Prosecutor) to open a formal investigation in Nigeria,” Amnesty said in a statement.

The statement came days after Bensouda said in her annual report on December 5 that there appeared to be a “tangible prospect” of proceedings against Boko Haram members, but not against troops “since the Nigerian authorities tend to deny any allegation.”

Amnesty complained that Nigeria’s government has not conducted any relevant proceedings into the atrocities, war crimes and crimes against humanity perpetrated by both Boko Haram militants and the Nigerian forces. This edition of the program talks about Boko Haram terror threats in Nigeria and the inability of the government to contain the Takfiri group.

It also suggested that most of the investigations and prosecutions conducted by the Nigerian justice system against alleged members of the Boko Haram group, as well as the military, were not in proportion to the scope and severity of the crimes and atrocities committed by both sides of the conflict in northeastern Nigeria.

Amnesty also said none of the more than 20 government inquiries launched into claims of abuse by troops and civilian militia members in the last nine years has led to formal investigations and prosecutions.

The proceedings seemed to have been designed to provide a “veneer of accountability” and exonerate senior officers and “shield persons concerned from criminal responsibility,” Amnesty added.

The report indicates that 5,161 Muslims have also sustained various degrees of injuries. It described mass trials of more than 1,000 suspects that began in October 2017 were as a “sham” meant to provide “legal cover” for those held in prolonged, arbitrary and unlawful detention.

Prosecutions were based on unreliable and untested confessions or guilty pleas, while defendants had a lack of access to lawyers and trials were rushed through.

Since 2009, the militants have killed at least 20,000 dead and made over 2.6 million others homeless. In 2015, Boko Haram pledged allegiance to the Takfiri Daesh group.