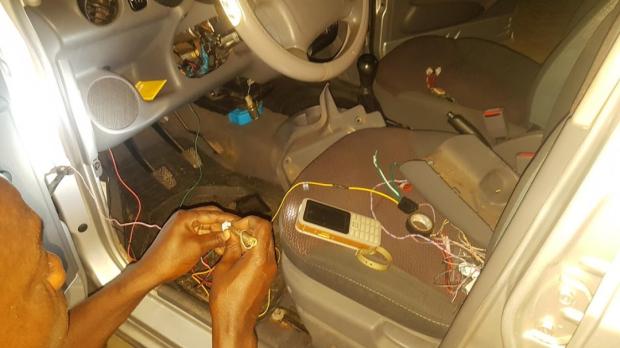 Hampered by an internet shutdown in Cameroon’s troubled English-speaking regions in January 2017, Zuo Bruno, a young ethical hacker, was inspired to develop a car-tracking application using SMS. The application named Zoomed, whose adoption has been fast in Cameroon, is now on the verge of spreading across the continent.

Cameroon has been interrupting internet intermittently in those regions over the last 20 months in an attempt to stifle dissent following mass protests by English-speaking teachers and lawyers which erupted in 2016, first tampered with internet connectivity on Jan. 17, 2017. The internet shutdown lasted 94 days. The internet was again plug off in October same year, taking the duration of the shutdown to a record 230 days, according to Access Now.

The country shut down the internet in the region for 230 days between January 2017 and March 2018 and it has hurt Cameroon’s burgeoning tech ecosystem in Buea, known as “Silicon Mountain”. While few founders and their startups moved out of the hostile environment, others have been able to turn the ordeal into opportunity.

“Following the disconnection, I noticed a lot of cars were being stolen and realized these stolen cars had internet-based tracking solutions installed but the owners still couldn’t locate their cars,” Bruno, founder of Zuoix; an information security start-up said. He says the government’s internet shutdown gave him the incentive to conceive the whole idea.

This is why it was especially ironic in February when Bruno’s innovation earned him the President’s 2018 Grand Prize (Gold) for Excellence in Scientific Research and Innovation in Cameroon. The award has a FCFA 10 million ($ 17,500) prize. Another tech enthusiast, 17-year-old Nji Collins Gbah from the same internet-interrupted region managed to emerge champion of the Google Code-in competition in 2017.

The Zoomed app does car-tracking based solely on specific  SMS commands which gives it an advantage in a continent where shaky internet connection and low penetration makes internet-based solutions less effective.. Bruno prices it at  FCFA 120,000 ($ 212) and takes less than an hour to get the app installed into an auto-mobile.

With a GPS chip installed in the vehicle, a user can locate a car or fleet, with direction, speed and elevation information. The Zoomed app also has features which supports geofencing, immobilization, ignition alert, voice surveillance, two-way calling and SOS alarm with artificial intelligence. No internet connection is required.

Bruno said rather than create an internet-based version, the app will use USSD technology. A user can dial simple USSD code, such as *XYZ*12#  and be able to locate their car, immobilize it or other features.  Using that technology means there will be no additional costs to the user.  USSD, which stands for Unstructured Supplementary Service Data, is typically used by mobile operators, especially in Africa — where the market is primarily prepaid—for their internal applications such as balance checks, top-ups, data bundles and promotions.

Ever since the Zoomed app caught nationwide attention, it has been upgraded to make cars location-aware; enabling the cars to send distress calls based on their current location to police stations, gas stations, hospitals and emergency services.

In Cameroon, the app already has a large client base; with over 50 enterprises, amongst them the country two top companies, making use of the app. “We are moving forward to other countries including Nigeria, Kenya and Ghana, and hoping for good results. Our plan is to send this application Africa-wide so that more people can enjoy the services we offer, secure their cars and have a good night rest knowing that their cars are safe.”