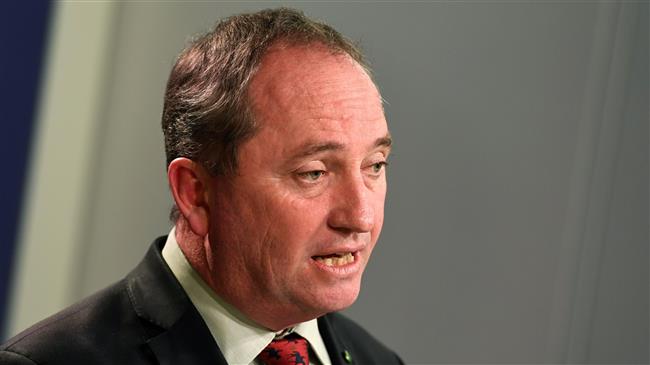 Australia’s scandal-hit deputy leader Barnaby Joyce announced Friday he was quitting and moving to the backbench amid claims of sexual harassment and controversy over an affair with a now-pregnant former aide.

Joyce, whose National Party rules alongside Prime Minister Malcolm Turnbull’s Liberals, has been front-page news in Australia for two weeks since it emerged he had left his wife of 24 years for his younger former media adviser, who is now expecting their baby boy.

The 50-year-old had insisted he would ride out the storm but his position became untenable on Friday when a sexual harassment complaint against him, which he denies, was lodged with the party.

“I will say on Monday morning at the party room (meeting), I will step down as the leader of the National Party and deputy leader of Australia,” Joyce said at a press conference in Armidale, his country New South Wales electorate.

Joyce was due to be the acting prime minister this week with Turnbull meeting US President Donald Trump in Washington, but opted to take leave.

With Foreign Minister Julie Bishop also out of the country, the role has been assumed by Senate leader Mathias Cormann, who said ahead of Joyce’s decision that any harassment claim must be taken seriously.

“Any allegation of sexual harassment is a very serious allegation,” he told reporters.

Joyce called the allegation “spurious and defamatory” and said he wanted it investigated by the authorities.

“I have asked that that be referred to the police,” he said, while admitting it had been “the straw that broke the camel’s back.”

His decision to quit came with colleagues reportedly growing increasingly frustrated with his handling of the love-child scandal.

Joyce had opted to give several media interviews this week, at a time when he was expected to be on leave and out of the spotlight and two of the party’s backbenchers had publicly called on him to resign.

A furious Turnbull, who relies on the smaller National Party to govern, slapped a formal ban on sex between cabinet members and their staff in the wake of the Joyce affair.

He twice declined to offer support for his deputy when asked by reporters in Washington on Thursday.

Junior Nationals minister David Gillespie has indicated he would be a candidate for the vacancy, while reports said Veterans Affairs Minister Michael McCormack had significant backing.

The new Nationals leader will automatically become deputy prime minister, under a coalition agreement between the two major parties of the center-right.

The daily media headlines on the scandal have riveted the Australian public and sparked debate about workplace culture amid the global #MeToo movement against sexual harassment.

But it has also highlighted the perilous state of the coalition government, which just a few months ago survived a crisis over lawmakers’ dual citizenship that threatened its wafer-thin parliamentary majority.