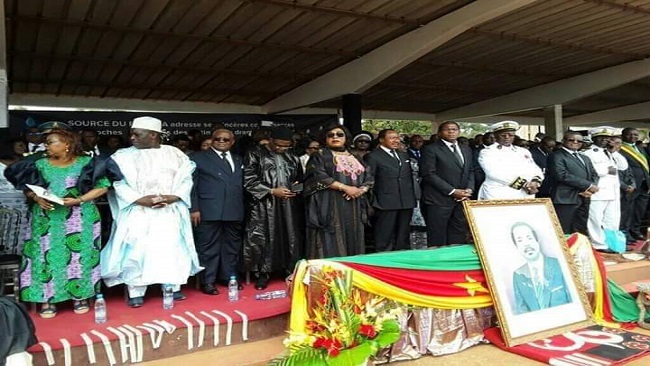 The low-energy prime minister and head of government who is still having challenges to stamp his authority on his own government, travelled to the country’s West region accompanied by his entire cabinet for a state-sponsored funeral ceremony that was held in honour of the victims of the recent Baffoussam landslide.

Cameroon Concord News Group had announced last month that the 86-year-old head of state, who conducts himself as a monarch, would check out in 2020. This was confirmed during the Baffoussam event. Prime Minister Dion Ngute and his cabinet seemed to be relaying the Cameroon Concord News Group’s message when they displayed Biya’s portrait on a coffin bearing the Cameroon flag; something that is usually done when senior officials of the corrupt government pass away.

President Biya usually mocks frequent rumours of his death, saying those who wish his death must wait for 20 more years. But with age taking its toll, he has been maintaining a kind of deliberate and radio silence over the latest predictions about his demise and this is no good news to his collaborators who are using him to enrich themselves.

The eminence of his death has been put on display at the Paris Peace Forum where the Yaounde strong man has been making a mockery of himself. While being received at the Elysee Palace by French President, Emmanuel Macron, Mr. Biya demonstrated that the spring in his step were completely worn out.

While Macron was making giant strides to meet Mr. Biya, the Yaounde dictator could only shuffle along. Age and alcohol have taken their toll. The once vibrant and flamboyant dictator is clearly on the wrong side of age. The signs of senile decade are obvious and many including his family are concerned, especially as he has been a colony of diseases for many years.