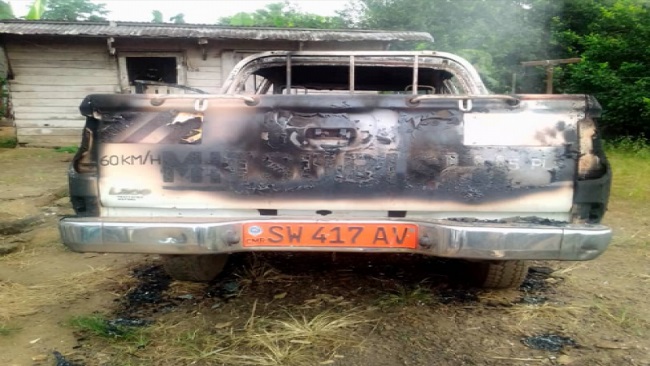 The residence of the Manager of the Industrial Unit of the Cameroon Development Corporation, CDC, in Penda Mboko was raided by gunmen on Thursday August 13, 2020 in an attack blamed on Ambazonia Restoration Forces by the Biya Francophone regime in Yaoundé.

Yaoundé hinted that suspected separatist fighters crossed from Muyuka in the Southern Zone of Ambazonia into the Mungo Division in French Cameroun and staged the attack.

Ali Malex, CDC Penda Mboko Industrial Manager is said to have been taken away to an unknown destination by the armed men.

Eyewitnesses say the gunmen successfully disarmed his guard, shot and killed his son who is currently writing the GCE Ordinary Level Exams and burnt down the official residence of the CDC Penda Mboko Industrial Manager including cars.

Cameroon government soldiers arrived late after the unidentified gunmen had completed their operation.

The office of the Southern Cameroons Vice President Dabney Yerima is yet to comment on the incident. On October 29, 2018, unidentified gunmen attacked Government Bilingual High School Penda Mboko. Students and teachers were forced to flee before the armed men set the campus on fire.

Penda Mboko is situated in the Mungo Division of the Littoral Region and borders the Southern Zone of the Federal Republic of Ambazonia where Ambazonia Restoration Forces have been battling Cameroon government security forces.

Back in 2018, unidentified armed men attacked the gendarmerie brigade in Penda Mboko setting it ablaze before taking off.

The area is currently under high security alert as internally displaced persons troop in from Muyuka after alleged Atanga Nji Boys passing for Ambazonia Restoration Forces slaughtered a 35-year-old lady on Tuesday.

By Fon Lawrence with additional reporting from Cameroon Info.Net