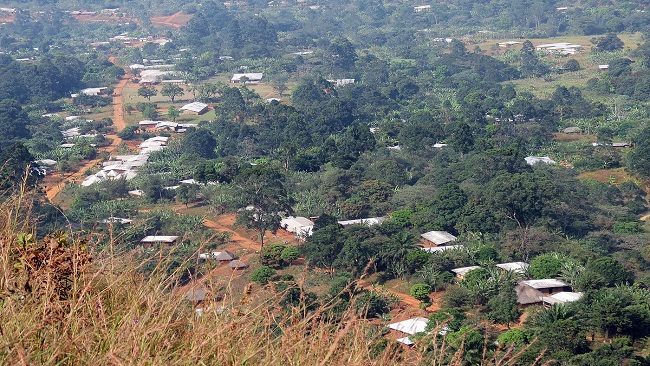 The French Cameroun army caused mayhem over the weekend in Djichami, a small community in the Belo municipality Boyo Division. For the past three weeks, inhabitants of Belo, Anyajua, Dzikfin, and other small villages have been targeted by the Francophone dominated Cameroon military with scores of houses burnt down. It should be recalled that the Raster man (Sam Sawyer) who was infamously beheaded by the cowardly soldiers from French speaking Cameroun was from Belo.

Cameroon Intelligence Report sources on the ground revealed that the beheading of Sam Sawyer changed the phase of the revolution as the young men in his community enrolled massively in to the resistance army. Many of the Belo young men and women openly told our correspondent that they prefer to die fighting, than to be killed like Sam Sawyer whom they say was never involved in an armed resistance before his demise.

We understand that last week, a gendarme officer in Belo left his colleagues and went out with his gun raping women and young girls. The officer our informant noted was captured by unknown gun men, and shortly after pictures of him with hands tied ,soaked in his blood were circulating on social media. The Francophone administrators in the constituency were quoted as saying that the beheading of the officer prompted the killing Sam Sawyer. A position denied by many Ambazonians contacted by our reporter.

In retaliation to the abduction and killing of the said gendarmerie officer, French Cameroun troops invaded the neighboring communities’ and moved right as far as Njinikom, torturing and killing innocent civilians. The inhabitants of Belo have abandoned their ancestral homeland because of the continuous French Cameroun military incursions taking along with them their livestock.  The French Cameroun army has been stealing goats, chicken and other foodstuffs in order to sustain their campaign in the area. With Belo now a ghost settlement, the inhabitants of Djichami reportedly destroyed the only bridge linking Belo and Djichami to prevent the blood thirsty French Cameroun soldiers from penetrating their neighborhoods.

This preventive measure could not protect the people of Djichami as the Francophone soldiers used the back corridor passing through Ndawara over the weekend and on Sunday morning killed 12 people. Homes were set on fire and an old man and his son were burnt alive. At the time of filing this report, we gathered that some armed men attacked the Gendarmerie Brigade down town Belo, but we are yet to confirm the casualties on the side of the French Cameroun army.

By Ntam Charles Ngeh in Bonn, Germany with files from Sama Ernest