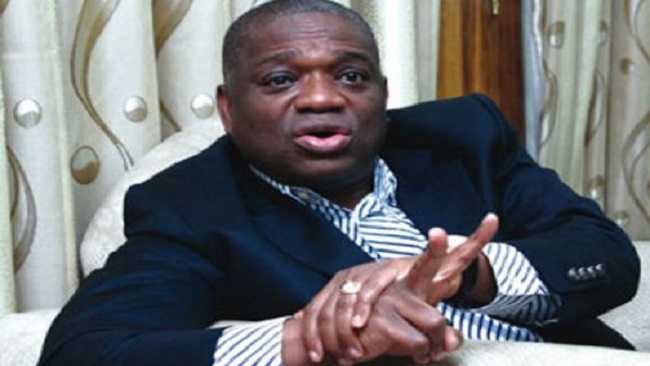 Mr Akpan Udoh, an accountant in the Abia Government House, who was scheduled to testify in the alleged N3.2 billion fraud trial of the former Abia Governor, Orji Uzor Kalu, has relocated to Cameroon.

The counsel to the prosecution told a Federal High Court in Lagos on Tuesday that Udoh is listed as a witness for the Economic and Financial Crimes Commission (EFCC).

The EFCC had on Oct. 31, 2016 slammed a 34-count charge bordering on N3.2 billion fraud against Kalu and his former Commissioner for Finance, Ude Udeogo as well as Kalu’s company — Slok Nigeria Ltd.

Kalu and others allegedly committed the offences between August 2001 and October 2005.

The accused had pleaded not guilty to the charges.

So far, the prosecution had called no fewer than 12 witnesses since the trial began.

At the trial of the case at the previous adjournmenr, the EFCC Prosecutor, Mr Rotimi Jacobs (SAN) had called the 13th prosecution witness, Mr Tobore Ovie, who introduced himself as an operative with the EFCC.

He was led in evidence by the prosecutor who also tendered some documents through the witness.

At Tuesday’s proceedings, the witness was reminded that he was still under oath and counsel to the first accused, Mr Awa Kalu (SAN) began cross-examination.

The witness told the court that he did not know if the prosecution’s intended witness, Mr Akpan Udoh, an accountant in Abia State Government House who EFCC claimed was on the run, is still alive.

He said that he had not met Udoh before and that he did not reside with the first accused.

During re-examination, the witness said that Udoh had deliberately evaded giving evidence and that he had earlier been cooperating with the commission before they lost contact with him.

According to the witness, they were able to reach his brother who claimed that Udoh had relocated to Cameroon.

“Further efforts to get his call logs from his service provider showed that he has been hovering between Cameroon, Republic of Benin and Katsina State.”

The prosecution called its next witness, who, in his evidence-in-chief introduced himself as Mr Emojevwe Eboh, a compliance officer with a commercial bank.

He told the court that his scope of duty involves responding to requests from regulator bodies and law enforcement agencies.

The witness disclosed that the EFCC wrote a letter to the bank requesting for the account statement and opening packages of General Ventures Nigeria Ltd.

He said the required authenticated documents including the certificate of identification were made available to the commission.

The prosecution tendered the documents the witness identified and the letter the commission wrote to the bank, requesting those documents and were marked as Exhibits R six to R 60.

The witness identified the first accused and Mr Godwin Akubuike as the shareholders and directors of General Ventures Nigeria Ltd.

He further listed 40 local cheques credited into the company’s account.

Justice Mohammed Idris adjourned the case until March 28 and March 29 for cross-examination.

Orji Uzor Kalu was alleged to have utilised his company to retain in the account of a commercial bank the sum of N200 million.

The sum was said to have formed part of funds illegally derived from the coffers of the Abia State Government.

Slok Nigeria Ltd and a man, Emeka Abone, who is still at large, were also alleged to have retained in the company’s account the sum of N200 million on behalf of the first accused (Kalu).

The accused were alleged to have retained about N2.5 billion in different accounts which funds were said to belong to the Abia Government.

Cumulatively, the accused were alleged to have diverted over N3.2 billion from the state government’s treasury during Kalu’s tenure as governor.