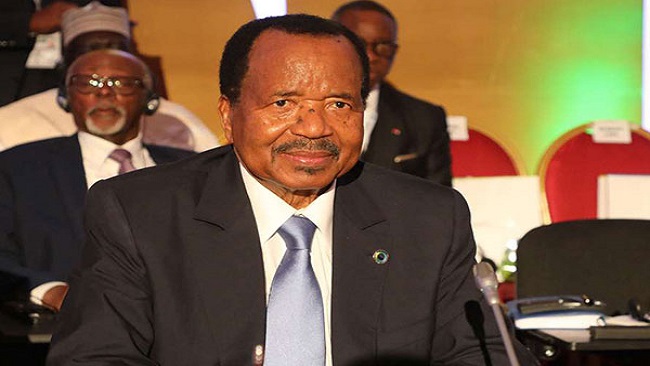 Cameroon’s President Paul Biya is poised to win a seventh term of office come October 7, which will see him extend his 36 years rule and become a life president.

Like in 2011, the 85-year-old president said his decision to run again was a nod to overwhelming calls for him to do so. His supporters already see victory for the incumbent.

Higher Education minister and the communication secretary for the governing Cameroon Peoples Democratic Movement (CPDM), Prof Jacques Fame Ndongo, said the incumbent will “win the election in all transparency”. Prof Ndongo reckons that President Biya remains the best choice for Cameroon because he respects republican institutions.

To the CPDM members, many of who hold hold key government positions, President Biya is indispensable and his succession is considered a taboo topic within government and the political party circles.

In April 2016, some opposition party militants, including the 2011 presidential candidate, Ms Edith Kah Walla, were arrested and detained in Yaoundé for protesting against Biya’s long stay in power and persistent brutality against voices opposed to his attempt to be “president for life”.

Yet, there is seemingly no reason to think President Biya will not win again.

A group of 20 opposition political party leaders have thrown their weight behind the candidature of incumbent. The “Group of 20 or G20” among who are four who were in the race to unseat Biya in 2011, said they had decided to give their “total and unconditional support” to the veteran because he “possesses the qualities and wherewithal necessary for the maintenance of peace, stability, national unity, economic progress and the respect of Cameroon in the international community.”

A member of the G20, Barrister Jean de Dieu Momo of the Democrat Patriots for the Development of Cameroon (PADDEC), who was eighth with a 0.49 per cent score in the 2011 poll, said the opposition cannot win a presidential election by presenting multiple candidates. To him, President Biya had “already won” the upcoming election with a 70 per cent score.

In his tweet that announced he would be in the run, the president said he was “aware of the challenges we must take up together to ensure a more united, stable & prosperous Cameroon”.

Tongues have been wagging that President Biya was too old to run, but the constitution does not make any provision for that. His supporters, on their part, are argue that at his age, and with his experience, he had exceptional mettle and values, which give him a considerable head-start vis-à-vis other contenders, to handle the challenges the Cameroon was facing.

Should he win another mandate, President Biya will be 92 by the time the tenure ends in 2025.

President Biya, who grudgingly accepted the introduction of multiparty politics in the early 1990s, repealed the term limits in 2008. He has ranked near the top in almost every list of the “World’s Worst Dictators” that has been published since 2005.

Political pundits say Cameroon had made more political losses than gains under the 36-year leadership of President Biya. The leader inherited a stable, united and prosperous Cameroon in 1982, but the country dropped from a middle income to a low income economy today.

Cameroon has a one-round presidential election system where a candidate only has to garner the most number of votes to be declared winner. No percentage threshold exists.

In most African countries that practice the one-round electoral system, incumbents have always emerged victorious. Such a systems, some Cameroonians claim, had contributed to President Biya’s over three decades stay at the helm.

Though President Biya has always been elected, critics say he was an illegitimate leader. Their arguments were a legion and one of them was that a president elected by less than five million people in a country with over 20 million inhabitants was not legitimate.

The 2018 presidential election comes at a time Cameroon was faced with several challenges including a separatist movement in its two English speaking Northwest and Southwest regions. Anglophone separatist activists who have been clamouring for secession and the creation of the Republic of Ambazonia, have warned that they would not allow any election organised by the Yaoundé regime to take place in “their country”.

But Mr Abdoul Karimou, the deputy Director General of Elections at the Cameroon poll agency, ELECAM said they would organise the vote in the regions “but ensuring security is the responsibility of the state”.

A political scientist and member of the governing party, Prof Elvis Ngolle Ngolle, said the vote would take place in the strife-hit regions and Cameroonians who would not feel like going to vote “have the right not to vote”.

While awaiting the final list to be published by ELECAM, latest August 8, President Biya has to face 27 opposition parties which have submitted their candidacy files. Scores of them are new comers, considered as light weight without enough experience to challenge the 36 years old system.

President Biya is Africa’s second longest-serving head of state. Only Equatorial Guinea counterpart Teodoro Obiang’ Nguema Mbasogo is ahead of him, by three years. In Congo Brazzaville, another regional bloc CEMAC state, Denis Sassou Nguesso has now served 34 years in two different stints, from 1979 to 1992 and then again since 1997.