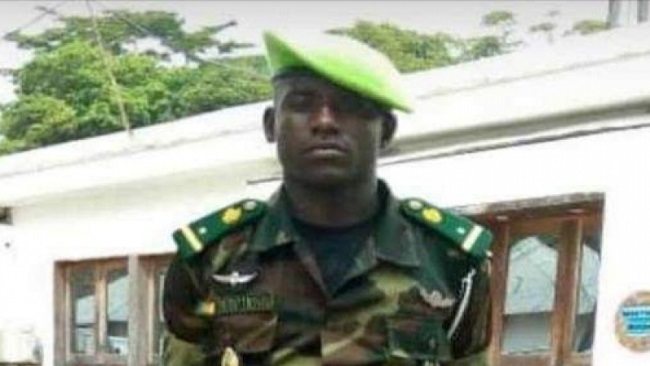 Frédéric  Nguiema Nzie a Sub-Lieutenant of the French Cameroun army recently assigned to head an operation with the Rapid Intervention Battalion (RIB) has been killed by Ambazonia Restoration Forces in Mamfe, the chief town in the Manyu County.

Sub-Lieutenant Frédéric Jeunesse Nguiema Nzie, enlisted in the Rapid Intervention Battalion (BIR), and deployed as part of the 6th Division died on April 28, 2020 during an operation around the residence of the Senior Divisional Officer for Manyu.

French Cameroun media reported that he served the Biya regime only for four months and made what Yaoundé described as the supreme sacrifice.

The young soldier from La Republique du Cameroun was a laureate of the 37th badge of EMIA named after Major General Jacob KODJI who including 181 others graduated on January 24th in a ceremony that was chaired by the French Cameroun monarch Paul Biya. He hailed from Kribi in the Ocean constituency in French Cameroun.

Oke Akombi Ayukepi Akap in Glasgow with files from CIN