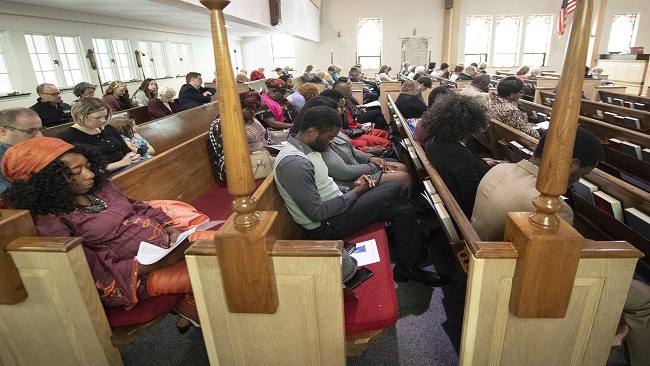 This music is played on loudspeakers by a group of seven members of the Tabernacles of Freedoms Ministries in Cameroon’s capital Yaounde.

The four women and three men move from house to house and street to street calling themselves end time evangelists. Thirty-two-year-old Prudence Mayah, the group leader is referred to by church members as sister.

She said last month God revealed to them through their pastor Ngoa Atangana that nations are wasting the time and resources being spent on fighting COVID-19.

“We are asking everybody to go on their knees and pray and know that there is nothing as coronavirus,” Mayah said. “It is God’s punishment for wrongdoing, for the several wars people are fighting in the world. A man marries a man and a woman marries a woman, so God is very angry.”

Among the 45 homes the group said it visited on Monday is that of 49-year old farmer Lionnie Fotso. Fotso said she believes in the teachings of the small church, and will follow its orders not to wear masks.

Fotso said Tabernacles of Freedoms Ministries has just confirmed her thoughts that COVID-19 is a hoax. She said no member of a group of 300 farmers where she belongs has ever attested that she saw a COVID-19 patient and none of them has been sick of the so-called coronavirus.

COVID-19 is very real, killing more than one million people worldwide since December. There have been more than 17,000 cases in Cameroon alone, and about 400 deaths in the Central African state.

But that doesn’t stop the Tabernacles church, which has about 300 followers and reaches more people with broadcasts on Yaounde radio stations.

When the student’s parents were asked to come to school and convince their children to wear the masks, the parents chose to take the children home. The parents said they were members of the church.

The governor said he has ordered the church to follow instructions on COVID-19 prevention or be arrested. ‘We have already closed down this church for anti-government policies,” Bea said. “You can imagine, some of our youths have refused vaccinations. Some of them are now refusing barrier measures (against COVID-19). Some of them refuse even to go to the hospitals, (saying) that if you die, they can pray and you come back to life.”

Even with the closure of the church, members have continued organizing their daily prayers and meetings in front of the sealed building.

The church says it also sends out fifteen groups of seven on a daily basis, to preach its erroneous message about COVID-19.