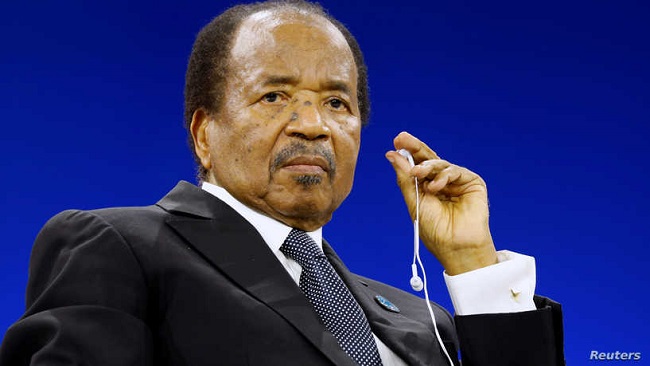 President Biya’s complete absence from the nation’s capital Yaoundé and his little or no response to the coronavirus pandemic, has been seriously condemned by a cream of French Cameroun political commentators including some prominent regime barons as shameful, disgusting and disgraceful with many observing that his poor management of the virus outbreak is ruining Cameroon’s reputation as the giant of the Sub Saharan region.

Biya’s recent decision to self isolate at his Mvomeka’a palace and his 37 documented years of incompetence and dishonesty in managing state affairs including the COVID-19 pandemic has left many in Yaoundé in disbelief.

Biya’s arrogant style of governance rich in several trips abroad tolerated in the past is now seen as downright dangerous by members of his own Beti Ewondo ruling clan. A prominent member of the CPDM political bureau who hails from the Centre Region told Cameroon Concord News that no one in government including Prime Minister Dion Ngute trust President Biya. The French Cameroun political elite who sued for anonymity also said the 87 year old Biya is now been seen as a threat to the future of the nation.

The regime in Yaoundé is noted for failed leadership and a sea of reckless actions. So far, Prime Minister Dion Ngute has made the wearing of face mask compulsory in all government buildings. But the whole mechanism put in place by the Francophone dominated government to combat the spread of COVID-19 ranges from plain fiction to the most absurd.

The new coronavirus, which causes a respiratory disease known as COVID-19, is believed to have emerged in the Chinese city of Wuhan late last year and President Trump’s latest decision to halt US funding to the World Health Organization (WHO) will of course affect countries like Cameroon that rely on the international system for survival.

The United States is the biggest overall donor to the Geneva-based WHO, contributing more than $400 million in 2019, roughly 15% of its budget.

Last month, the Group of Seven (G7) countries failed to agree on a joint statement on tackling the COVID-19 pandemic because US Secretary of State Mike Pompeo insisted on calling it the “Wuhan virus”.

The additional measures also include the local production of medicines, protective masks and hand sanitisers, the establishment of specialised treatment centres for Covid-19 patients in all regional capitals, intensification of screening and awareness-raising campaigns.