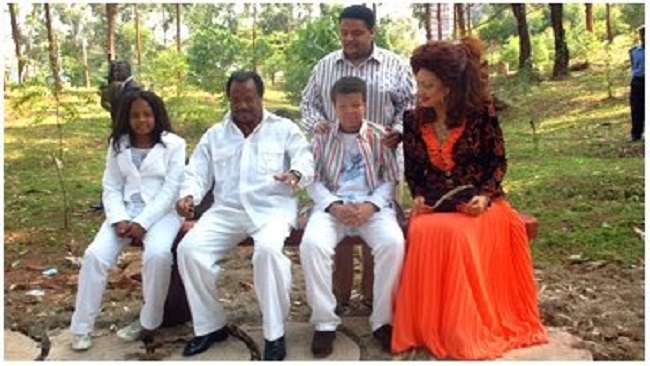 Brenda Biya and the Biyas: the public call for sympathy is deeper 0

A ringside seat with popcorn to watch the public unravelling of Cameroun’s first family is now a must. If one ever needed to be persuaded that money can’t buy you happiness, the current production in Cameroun’s first family might just do the trick. For more than thirty-eight years in power, the world’s oldest dictator has colluded to destroy two generations of his country’s youth, labour force and potential with impunity. His vindictiveness, exaggerated thievery of state funds and running down of the country’s public services will go down in history as one of the worst attempts at leadership ever. But it’s not his crimes against his people that are his latest production in town; it is the unravelling of his family in public.

This week’s revelation from his daughter, Brenda Biya, about her health problems has drummed sympathy from countless parents the world over. Brenda Biya is suffering from a disease that widens the cavity in which one’s eyes are lodged. But her revelation on Facebook that she has discontinued her treatment due to the confiscation of her documents and prescriptions has raised eyebrows in the world of political reporting. Her comments exposed a deep underlying problem from a troubled soul.

A few years ago, I was fortunate to represent a national sales establishment in the United Kingdom. In one of my presentations, I became acquainted with a lovely British citizen who had been Brenda Biya’s English teacher during her early years in Yaoundé. She educated me on the pitiful attitude she displayed as a spoiled brat. She explained that during her English classes, the presidential guards would frequently impolitely interrupt her lessons to check if Brenda was okay in a class of fifteen kids. She found the effort of teaching her and dealing with the constant interruptions from the presidential guards laborious and primitive. She registered her profound disgust at the attitude of the child towards learning.

Brenda’s English teacher lived in Bastos, Yaoundé, a place she described as an eye-sore although she was told that it was the up market part of town. There, she endured a housekeeper that plagued her with persistent begging. Her housekeeper demanded her phone, dresses and anything she owned that did not move. The aggressive begging and bad manners from the young Brenda and her bodyguards were so ruthless; the English teacher politely terminated her teaching contract and moved to China for another appointment.

Fast-forward almost sixteen years after her English language tuition in Yaoundé; she is twenty-two years old and a student at the neo-colonial institute for administration and magistracy, ENAM. She was admitted into ENAM in 2017 after a disastrous attempt to study in the USA resulted in her inhaling more toxic chemicals than her little brain could tolerate. She lived a glamorous but empty lifestyle in Los Angeles, California, from the proceeds of her father’s embezzlement.

Brenda’s brother, Paul Biya Jr, is an embarrassment of unmatched proportion. The last time anything was heard from him was when he was absent from ENAM in 2018. Those close to him made public that he had no aptitude and attitude for education and intended to pursue a career as a nightclub DJ.

It is a demonstrable fact that children acquire values from the family. Psychologists say we gain a sense of decency and learn to emulate our parents of what constitutes satisfactory and unacceptable behaviour in the home and society. Paul Biya’s continuous lodging and partying in the Intercontinental Hotel in Geneva over the years made his absence from his family conspicuous and the consequences are unravelling in this pitiful family melodrama. Whether he is dead or alive, he is paying profoundly for his indiscretions and inability to perform the role of a father figure in his home. With all the hundreds of billions of US dollars he has embezzled, his home is a failed unit. Some will say Karma. None of his children Franck Biya included has earned a University degree.

It is at moments such as this that a mother can use the power endowed upon her by nature to bring the family together to make things better. But not Chantal Biya. She is pitifully under-educated and her past before her meteoric ascension to the first lady throne is less than glamorous. The value of education and good morals were never around her intellectual and moral neighbourhood. You cannot give what you don’t have. The family foundation has been built on sand, embezzlement and worldly possessions.

The fragility of character in the Biya household is particularly obvious as the days go by. Over the last few weeks, Paul Biya’s private doctor, driver and cook have all died from COVID-19. The silence from his household and collaborators is getting louder and louder. Brenda Biya’s social media rants are an indication that something deeper is trending in the Biya household.

If the collaborators in the CPDM crime syndicate in Yaoundé were confident that their actions were rational and should be seen as such, Brenda shouldn’t be reduced to tears and emotional rants on social media about her medications and particulars. Brenda has fashioned a defining moment in her family and the Cameroons with her public call for empathy. Mvomeka can’t just paper over the cracks.

It is extremely telling that Chantal Biya and the president’s close acolytes have stonewalled questions about the 87-year-old dictator’s life, health and actions over the last few months. Is he dead or alive? That’s the puzzle every Cameroonian has been seeking to solve for three months. Truth twisting in order to justify staying in power forever is not working anymore. Time has run out for the Beti-Ewondo mafia that has administered the Cameroons like a little family grocery shop. Biya has failed himself, his family and his nation miserably. His regrets, crimes and sins are aplenty and he won’t die in peace however benevolent the gods are. The time to come clean and put Brenda and the Cameroons out of their misery is now.