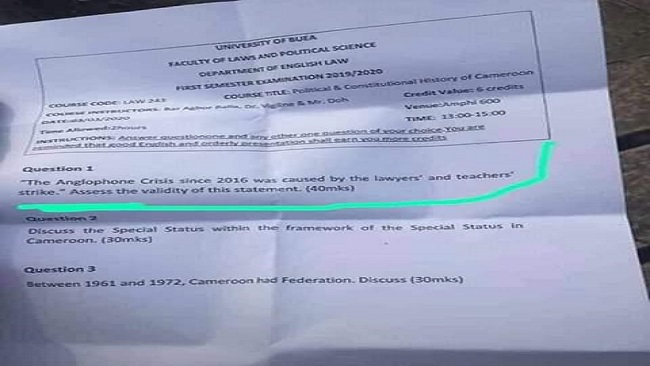 Barrister Nkongho Felix Agbor alias Agbor Balla, Instructor at the English Law Department, Faculty of Laws and Political Science of the University of Buea has been summoned by authorities to justify why he set an examination question on the Anglophone Crisis.

The Disciplinary Hearing opens at 10:00 a.m. Wednesday, May 6, 2020 at the Board Room of the Central Administrative Block, said Prof. Atangcho Nji Akonumbo, Dean of the Faculty of Laws and Political Science.

The rights activist is said to have breached professional obligations when he set an exam question on the Anglophone Crisis in a first semester level one course titled “Political and Constitutional History of Cameroon”. The question read: “The Anglophone crisis since 2016 was caused by lawyers’ and teachers’ strikes. Assess the validity of this statement. (40 marks).”

An “Invitation Letter to a Disciplinary Hearing” dated April 29, 2020 was only delivered to Agbor Balla’s office at the Centre for Human Rights and Democracy in Africa (CHRDA) at 12:08 p.m. Tuesday, May 5, 2020, Cameroon-Info.Net has learnt. Although Agbor Balla was not on seat, the invite was received on his behalf by one of his collaborators at CHRDA where he is founder/president.

In the invitation letter, Prof. Atangcho writes: “On the instruction of the Vice-Chancellor of the University of Buea, and in keeping with article 16 of decree No. 93/036 of 29th January 1993, you are being invited to appear before a constituted Disciplinary Panel of the University to hear allegations against you for non-compliance of professional obligations for a question you set on LAW243: Political and Constitutional History of Cameroon, during the 2019/2020 first semester examination.”

The Minister of State  for Higher Education and Chancellor of Academic Orders,  Professor Jacques Fame Ndongo had on April 20 instructed the Vice-Chancellor of  the University of Buea ,Professor Horace Ngomo Manga  to put a definite end to all  on-campus activities of  Agbor Balla which breach the “ethics and deontology”  of the University.

Cameroon-Info.Net recalls that when the crisis in the North West and South West regions started in October 2016 with the Lawyers’ and later Teachers’ strike, Agbor Balla was President of the Fako Lawyer’s Association (FAKLA) as well as President of the Cameroon Anglophone Civil Society Consortium, CACSC.

When pressure came to bear on government, the CACSC was banned on January 17, 2017 and Agbor Balla arrested same day along with Dr. Fontem Neba who served as Secretary General of the Consortium.

Brought before the Yaoundé military court for promoting terrorism among other charges that carry the maximum sentence, Agbor Balla was freed when President Biya ordered the discontinuance of proceedings against him and others on August 30, 2017.

Human Rights Lawyer Agbor Balla’s trouble at the University of Buea may not be unconnected to his indictment of government for the February 14, 2020 killings in Ngarbuh.