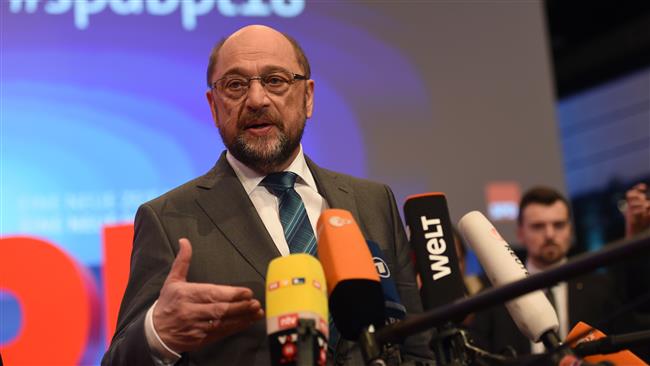 Bundes: SPD to decide on coalition talks with CDU 0

Germany’s Social Democratic (SPD) Party is scheduled to hold a meeting on Sunday to decide whether the center-left party should initiate formal coalition talks with Chancellor Angela Merkel’s conservatives, a decision that may help pull the European country out of a protracted political limbo.

Some 600 delegates from the SPD and its 45-member board would gather for a make-or-break conference in the western German city of Bonn on Sunday to vote on whether to pursue a coalition deal with Merkel’s Christian Democratic Union (CDU) and its Bavarian sister party, the Christian Social Union (CSU).

The meeting marks a crucial moment in the four-month effort to establish a new German government and will also be watched closely elsewhere in Europe, where Germany is the largest economy.

The Sunday vote aims to endorse the conditions of a preliminary deal that was struck between SPD leader Martin Schulz and Merkel’s conservative parties earlier this month, which calls for more concessions on labor, health, and migration policies.

A negative vote by the SPD would prolong the political deadlock and leave Merkel with the option of either leading an unstable minority government or facing snap polls.

“Social Democrats in all of Europe are looking at this party conference,” Schulz said on Saturday.

In an interview with German newspaper Welt am Sonntag, SPD parliamentary leader Andrea Nahles said she expected formal talks to happen, stressing, “I ask everyone in my party to take responsibility: Please consider the consequences if this government option fails.”

A leader of Merkel’s Bavarian CSU sister party also said that a “no” vote would be “a political catastrophe” for Germany.

“I can only appeal to everyone to get it together and help bring about a government,” Horst Seehofer said in a recent interview with Bildnewspaper.

Germany has been in political limbo since elections in September last year, which saw heavy losses for the centrist “grand coalition” that has been ruling the country for the past four years.

Merkel, seeking a fourth term in office, has been looking to form a coalition with the Social Democrats after her center-right bloc lost some support to the far right Alternative for Germany (AfD) Party in the elections and her attempts to form a three-way tie-up with the pro-business Free Democrats (FDP) and the Greens failed.

The two mainstream German parties, the CDU and the SPD, fear that a lack of consensus among them could give the far-right nationalist parties more of a say in German politics as the September general elections clearly showed that they are on the rise.

In her annual New Year’s address, Chancellor Merkel said Germans had rarely been so split over the changes taking place in their society, stressing that she was committed to helping tackle the challenges of the future by working rapidly to build a stable government.

The results of a survey, which was conducted by the Forsa polling company last week, found that 61 percent of SPD voters were in favor of moving on to formal coalition talks. The same poll found that the center-left party would score just 18 percent if elections were held now, below the 20.5 percent garnered in September.