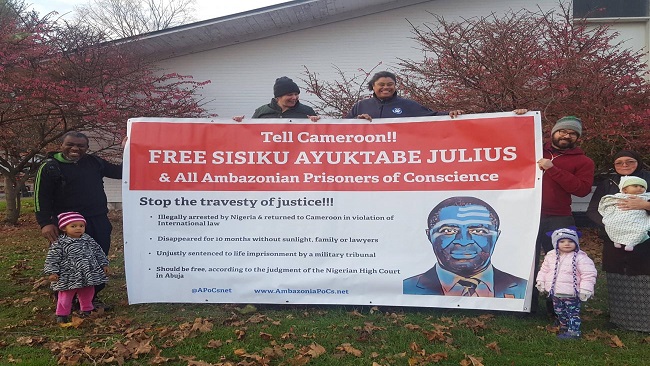 War Resisters’ International has recently been joined by new affiliates. One of the new affiliates of our expanding network is the Ambazonian Prisoners of Conscience Support Network (APOCS Net). On this Prisoners for Peace Day, we feature APOCS Net’s work and encourage our followers to write to Ambazonian prisoners of conscience, alongside other prisoners for peace and conscience.

Below is a call for support from APOCS Net explaining their work and encouraging everyone to stand in solidarity with, and write to, Ambazonian prisoners of conscience.

The Ambazonian Prisoners of Conscience Support Network (APOCS Net) was started in January 2018 by Ambazonian diaspora organizers and allies in South Africa, the United Kingdom and the United States who wanted to help Ambazonians who had been rounded up and imprisoned in secret detention centers of the French Neocolonial regime in Cameroon.

The current generation of Ambazonian Prisoners of Conscience refers to people imprisoned for the expression of their conscientiously held belief that the fundamental human rights of the people of Ambazonia, formerly the United Nations Trust Territory of Southern Cameroons under United Kingdom administration, needs to be respected by all — including the French neo-colonial regime in Cameroon and its allies. The conflict between Ambazonia and Cameroon, which is the basis for the imprisonment of close to 3,000 Ambazonian political prisoners, has it roots in the military occupation of Ambazonia by Cameroon following an ill-fated UN plebiscite on a confederation between the two countries in 1961.

Six decades of disciplined protest have been based on the principles of nonviolence and the slogan “the force of argument, not the argument of force.” The recorded history of repression against indigenous Ambazonians, however, goes as far back as 1891 during the period of German colonization. Legendary leader Mountain King Kuva Likenye was deported from Buea to Wonya Mokumba because of his anti-colonial stance, where he fell ill and died soon after.

The number of Ambazonian political prisoners has skyrocketed since fall 2016, following nationwide protests to defend the Ambazonian common law–based judicial system from the Cameroonian regime’s attempt to replace it with what amounts to a colonial court system.

The most high-profile prisoner is Sisiku AyukTabe Julius, an open source tech developer known for his nonviolent leadership and philanthropic work, who in January 2018 was arrested along with his aides while meeting at the Nera Hotel in Nigeria, and forcibly returned to Cameroon in violation of the international legal principle of nonrefoulement.

In March 2019, the Federal High Court of Nigeria ruled that the abduction and deportation of these “Nera 10” and other prisoners by Nigerian authorities was illegal within Nigeria, and a violation of international law, and that they should be immediately released and returned to Nigeria. Yet they are still being imprisoned by the Cameroon regime.

These prisoners of conscience continue to provide leadership from behind bars, and APOCS Net works to support their physical and emotional well-being, to gather and disseminate information that is relevant to their struggle, and to organize solidarity actions in consultation with their needs and campaigns. We also work to support imprisoned human rights defenders in Cameroon, such as the Kamto 203 and l’Association pour la Défense des Droits des Etudiants  au Cameroun (ADDEC), as well as other political prisoners in the rest of the Francafrique controlled territories. APOCS Net actively seeks to contribute to the building of a global network in solidarity with imprisoned human rights defenders all over the world.

Below is information on how you can write to the Ambazonian prisoners of conscience named in this article. Follow the links to read more.

Write to the Nera 10 prisoners at the following address:

NOTE: write to each prisoner individually, using their individual names; do not use the term Nera 10!

Write to Penn, Mancho and Tsi at: