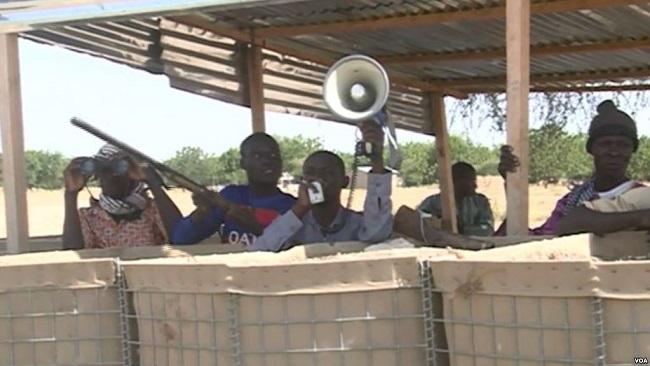 Cameroon has reactivated village militias on its northern border with Nigeria after twin suicide bombings Wednesday wounded 29 people. Authorities say the bombers were Boko Haram terrorists who crossed over from Nigeria. It is hoped the armed locals can prevent further attacks.

A group of 200 young men, drawn from 20 villages around the town of Amchide, sing a song about initiation into the local militia. In the lyrics, they vow to defend their communities from all intruders who would disturb the peace they had enjoyed for the past five months.

That peace was shaken on Wednesday when two suicide bombers attacked a food market in Amchide, wounding 29 people,nine of them critically. The women bombers — the only ones killed — are suspected of having crossed over from the neighboring Nigerian town of Banki.

Midjiyawa Bakari, governor of this far northern region of Cameroon, which borders Nigeria., said the bombings prompted him to reactivate the village militias, known as self-defense groups.

He advised people to be extremely vigilant. He said Boko Haram fighters and suicide bombers may want to infiltrate at this time of year when people are traveling between Nigeria and Cameroon to buy goods in preparation for end-of-year feasts.

She said she now feels the pain Boko Haram victims have gone through. With Boko Haram’s unpredictability, she said death is very near and pain very likely.

Cameroon reopened most of its border with Nigeria in January, five years after it was closed due to Boko Haram attacks.

Rigobert Galdima, leader of an Amchide militia, said the self-defense groups were disbanded when attacks waned, but they don’t want further suffering inflicted on their people.

He said they are ready to help stop suicide bombers and fighters from coming to their villages. But he added that it is not an easy task because most self-defense groups don’t get paid and lack training and basic communication tools.

In addition, he said some are also traumatized when their family members and houses are targeted by Boko Haram supporters.

The militias live on donations and what support they can get from Cameroon’s government. In recent years, authorities arrested some militia members suspected of being Boko Haram supporters.

Rosaline Ngwesse, a politics and crime analyst at the University of Yaounde, said the militias are vital if Boko Haram is to be defeated. But she said those who seek to join them should be thoroughly screened.

“They must be reliable and competent, diligent, assiduous, available and willing to work,” she said. They are supposed to know the rules and regulations, ethics and deontology [moral thory related to duties and rights]. If they are not, then there is a problem somewhere.”

Cameroon and Nigeria recently said they have reduced Boko Haram’s ability to organize large-scale attacks, with none reported for the past year. But they also warned the terrorist group was restocking its ranks by recruiting vulnerable young people.