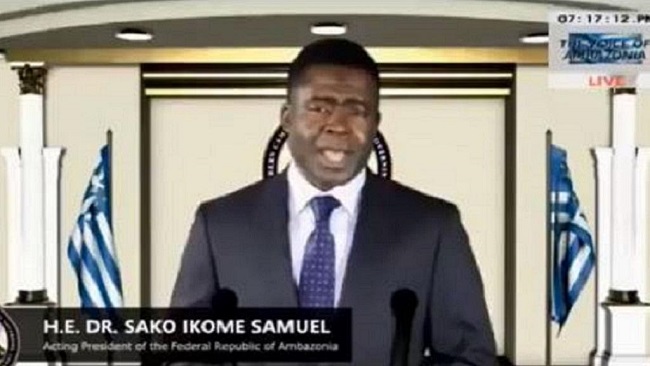 Cameroun published some information on how this terrorist operation was executed. This was a special joint terrorist operation ordered and superintended by the Special Security Adviser to President Buhari, Babagana Mohammed Munagano.  Mohammed Babagana Mungano provided the participating members of the Special Operations Unit of the Presidency of French Cameroun deployed for the mission by Martin Belinga Eboutou, the Director of the Civil Cabinet of French Cameroun with Nigeria army uniforms. Martin Belinga Eboutou is the defacto President of French Cameroun due to the agony which the prostate cancer incapacitated and demented incumbent is undergoing.  The dictator whose death has been speculated in recent times, can no longer provide effective leadership on any significant matter.

Cameroon Concord News Group brought to the attention of the world that the intention of providing the participating members of French Cameroun’s special operations unit Nigerian Army uniforms was to conceal the presence and criminal activities of a foreign army in the territory of Nigeria, particularly in Abuja, the capital of the Federation of Nigeria.  The entire operation was mired in corruption of unprecedented proportions, bankrolled on behalf of French Cameroun by Martin Belinga Eboutou. The proceeds of the corrupt terrorist operation benefitted President Buhari, his Vice President Yemi Osibanjo, Mohammed Babagana Mungano, the National Security Adviser and a coterie of persons within the corrupt cartel of ethnic clansmen in the Buhari administration.

Babagana Mohammed Mungano in his outing failed to provide critical information to Nigerians about the secretive criminal corrupt operation.  Where were the Ambazonia leaders abducted? By who? Where are they? In Nigeria or in French Cameroun?  What was the legal basis for their abduction? Without confirming or denying the public statements by his ethnic Fulani brethren and Boko Haram collaborationist Issa Tchiroma Bakary, the spokesman for the French Cameroun Government that the abductees were in their custody, Mohammed Babagana Mungano, justified his criminal conduct on behalf of the Federal Government as an attempt to deny Nigeria being used to destabilize French Cameroun.  The hypocrisy in this attempt to justify the violations of international law is evident in the double standards evident in Buhari’s approach to opposing supposed attempts to destabilize French Cameroun from Nigeria.  The abduction in violation of the Nigeria’s constitution through the impermissible criminal conduct contradicts the support and sanctuary that Buhari in his first administration provided to his Fulani ethnic co-conspirators Bello Bouba Maigari and others wanted then in French Cameroun for staging a failed coup d’etat that claimed thousands of lives.  The motivation for the abduction of the President and members of the Interim Government of the Federal Republic of Ambazonia was therefore purely actuated by corruption and a desire to enrich a political cabal formed around President Buhari to ensure his political survival in the next elections in 2019.

Cameroon Concord News Group strongly urges the Interim Government to deploy every means possible including securing the support of partners worldwide to locate and free our leaders whether held in Nigeria as some leads suggest or in French Cameroun.  Cameroun Concord News strongly denounces the legitimization of terrorism by Nigeria and French Cameroun through the abduction of Ambazonia leaders who were legally in Nigeria under the protection of international law and Nigeria international treaty obligations.   If nothing is done and this abduction left unsanctioned, it may legitimize the crime terror, threatening peace and security in the sub-region.

Cameroon Concord News Group is concerned that the message by the United Nations High Commission for the Refugees condemning this violation of international law has not been followed by a strong resolve urging Nigeria to produce the abductees and return them to the custody of the UNHCR.  The abduction is not a mere state violation of its treaty obligation; it is an interstate parties’ criminal conduct that sets a dangerous precedent in a volatile sub-region where international peace and security concerns are constantly making the international community nervous.  Is the United Nations by its timid reaction tacitly suggesting that Ambazonia left to itself, should seriously consider resorting to a tit for tat reprisal using the same methods to discourage the abduction of its citizens and leader by Nigeria and French Cameroun? How different are the pecuniary, or even political motivation for the abduction of the Ambazonia leaders different from the abduction for ransom crimes that French Cameroun Government officials have arranged with Boko Haram in the past by abducting foreign nationals for ransom? If left without a strong response and sanctions, will this abduction not legitimize the many ransom for freedom abductions against prominent politicians, their families and businessmen?

Cameroon Concord News Group strongly supports the decision of the Interim Government banning all elections in Ambazonia organized by French Cameroun. In view of the declaration of war made by Paul Biya against Ambazonia, the said elections are intended to support the war efforts of this foreign government, against Ambazonia.  There can be no credible election when the electorate is being pursued and massacred by enemy forces and many are in refugee camps in Nigeria and others are in the forests. Cameroon Concord News Group agrees that any Ambazonian or anyone residing in the territory of Ambazonia or deployed to the territory of Ambazonia taking part in the same elections must be considered a war enemy ally.

Cameroon Concord News Group applauds the efforts made by neighbouring communities in Nigeria, the Governors of these neighbouring states, individuals and communities within Nigeria, politicians, businessmen, churches, men and women of goodwill in Nigeria and worldwide who through prayers, financial and material contributions or other means are helping our refugees and supporting our cause.  Your understanding of our plight and predicament, despite the outrageous conduct of some elements within the Federal Government, highlights the grandeur of the human spirit and the rule of law character of the Federal Republic of Nigeria.  Your support for our refugees and seeking the release of our abducted leaders and the justice of our quest for freedom are greatest appreciated. Cameroon Concord News Group is optimistic that victory belongs to the people of the Federal Republic of Ambazonia.