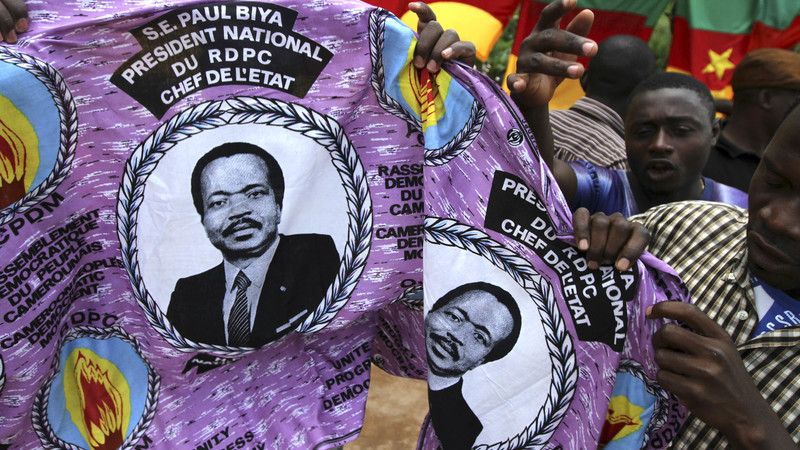 Cameroon: CPDM takes its show to the road 0

As the February 9, 2020, elections approach, Cameroon’s ruling and ruining party, the Cameroon Peoples Democratic Movement (CPDM), has taken its show to the road.

The CPDM has sent its delegations to major cities in the two English-speaking regions of the country where there is total insecurity and these delegations are protected by soldiers and their armored vehicles, something that is not applied to opposition political parties.

The CPDM says that is advanced democracy. The party still considers itself as the national party, where there is no distinction between the state and party. Cameroon is a country without any campaign financing laws and misuse of state resources by the ruling party is considered normal.

Back to the drama. Ashiri Kilo, the head of the CPDM delegation to Kumbo, rambled in a bid to stir the population into standing up against the Amba fighters who are now responsible for law and order in the Northwest and Southwest regions.

After delivering her normal and senseless speech, she promptly left the place, as she knew that the consequences of what she had said could be dire. She made it in one piece to Bamenda, but their family home in Sop, her native village, was not lucky. It was torched and many family members have been left homeless.

In Bamenda, the usual noises were made by the usual suspects.  Yang Philemon, the former prime minister and a key member of the delegation to the northwest province was not happy to head to his native northwest. He was heard grumbling about the useless and meaningless visits to the regions.

A source close to the former prime minister said that he was not really in favor of those risky trips to the northwest, but he has no choice. He has eaten and dined with the devil. He must play by the rules, as failure to comply might result in an unpleasant situation.

His predecessor, Inoni Ephraim, can tell him how it feels like to be in the Yaoundé Maximum Security Prison after having been the country’s prime minister. It does not seem like it is pleasant, as Inoni has ended up with lots of illnesses and is out of the country seeking better healthcare that they cannot provide to Cameroonians.

The drama also played out in the Southwest region. In Mamfe, Senator and former chief of Bachou Ntai, George Tabetando, led a delegation of chicken-hearted fellows who sneaked into the Manyu Divisional headquarters of Mamfe and conducted business with no fanfare.

The Mamfe town hall that could seat more than 2,000 people was virtually empty, as Amba fighters had given a stern warning to residents to stay away from the CPDM soap opera. The injunction stated that anybody who attended the event will have to pay a huge fine and anyone caught with CPDM memorabilia would face the death penalty. The CPDM is now considered by Southern Cameroonians as the Corona-virus which could lead to death.

Only so-called external elites who are still working hard to maintain their small positions in the civil service and a few hungry locals showed up, but they only wore their CPDM uniforms when they were inside the venue of the meeting. But danger was locking very close to home, despite the presence of soldiers who themselves are showing signs of fatigue.

The Amba injunction was being respected by everybody. The meeting lasted for less than one hour. Senator Tabetando who had asked for forgiveness the last time he was in Mamfe went back to commit his usual crimes. The CPDM is a crime syndicate and a terrorist organization in Southern Cameroons and associating with it is a crime that carries the death penalty. Mr. Tabetando and his delegation were aware of the penalty, so they left the city immediately after their drama and melted to an unknown destination.

Onlookers only heard him giving instructions to his driver to drive as fast as possible and that he should not stop anywhere, as Amba boys could emerge from nowhere. Tabetando has not yet been forgiven. He has also lost his throne as the chief of Bachou Ntai. There is a death penalty hanging over him as the Sword of Damocles. He has made things worse by going to preach about the special status in a territory that is hostile to the mess they call special status.

In Bangem, it was Prof. Elvis Ngole Ngole who was the lead clown. He had been locked up in an armoured car throughout the journey. He knows there is also a death penalty awaiting him in Southern Cameroons. Speaking to a journalist of the CRTV, a state-owned media outfit only comparable to the Soviet Pravda  (The Truth) which has been misinforming Cameroonians for decades,  Prof. Ngole Ngole, noted for his rambling, produced some of his laughable expressions which did not make any sense to the local population that holds him in low esteem.

After his TV show, Elvis Ngole Ngole and his people disappeared into East Cameroon conscious of the consequences that may come their way as the day was wearing out. This drama was uncalled for. The CPDM has already won the elections. The results are known. Out of 180 seats, the opposition has only filed 46 candidates, as many of their candidates were disqualified by the election body, ELECAM, which is a wing of the ruling CPDM.

Some CPDM candidates are already celebrating their victory. Since there are no opposition candidates in certain constituencies, the CPDM candidates already know that they will be declared winners. For example, Mr. Ekole Peters, the former general manager of CAMTAINER, a member of the CPDM Central Committee from Konye in Meme Division, is already popping his champagne. His victory is already in his pocket. There is no opposition party list in Konye. But for now, he cannot celebrate aloud, as he could attract very angry Amba fighters who are always ready to inflict excruciating pain on those who are helping the Yaoundé government in its efforts to exploit the people.

The exercise itself is a waste of time. An exercise in futility! The world is aware of the government’s gimmicks and nobody is taking the government seriously.   Even in East Cameroon, there is no enthusiasm. The population is tired. For 37 years, nothing has changed. The same people have been in parliament for decades. Many have been in parliament for 50 years and there is nothing to prove that they have the people’s interest at heart. This year’s elections are simply a formality.