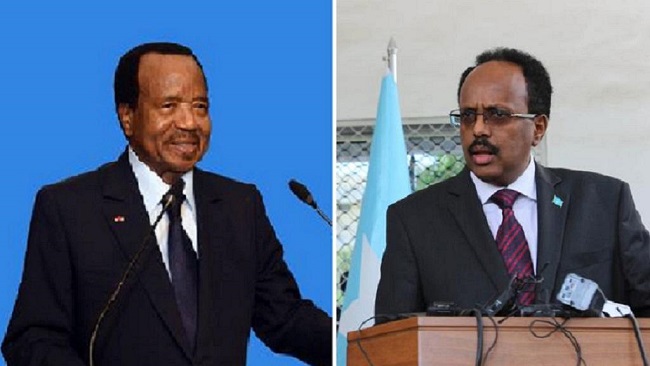 Presidents of Cameroon and Somalia have made official comments on the occasion of World Press Freedom Day. Both leaders used their social media handles to make their views known.

For his part, Cameroon’s Paul Biya spoke about the effect of fake news. “Disinformation, slander and lies for selfish gains, have eclipsed the dissemination of real news,” he said in a tweet.

On his part, Somalia’s Mohamed Abdullahi Farmaajo lauded the efforts of journalists across the country promising to protect the constitutional right of freedom of expression.

“Many praise to the Somali media as we mark the World Press Freedom Day. You’ve shown resilience and commitment to your work, even under tough circumstances.

“My administration is committed to protecting the freedom of expression, a right enshrined in our Provisional Constitution,” he said. Incidentally, the two countries are noted for gross rights abuse against journalists in the line of their work. Somali journalists have often been shot dead by militants operating in parts of the Horn of Africa nation. Arrest and detention of journalists also happens from time to time.

In Cameroon, international rights groups have reported that the government employs an atmosphere of fear and restrictions that force journalists to self-censor their work for fear of detention and high fines.

Some journalists in the country’s Anglophone regions have also been arrested in the line of their work. The country’s communications minister, however, pegs press freedom to the number of media houses operating in the Central African nation.

It is an opportunity to: celebrate the fundamental principles of press freedom; assess the state of press freedom throughout the world; defend the media from attacks on their independence and pay tribute to journalists who have lost their lives in the line of duty.

The 2018 Theme is: ‘Keeping Power in Check: Media, Justice and The Rule of Law.’ According to the U.N., the theme of the 2018 celebration highlights the importance of an enabling legal environment for press freedom, and gives special attention to the role of an independent judiciary in ensuring legal guarantees for press freedom and the prosecution of crimes against journalists.

At the same time, the theme addresses the role of the media in sustainable development, especially during elections – as a watchdog fostering transparency, accountability and the rule of law.

The theme also aims to explore legislative gaps with regard to freedom of expression and information online, and the risks of regulating online speech.