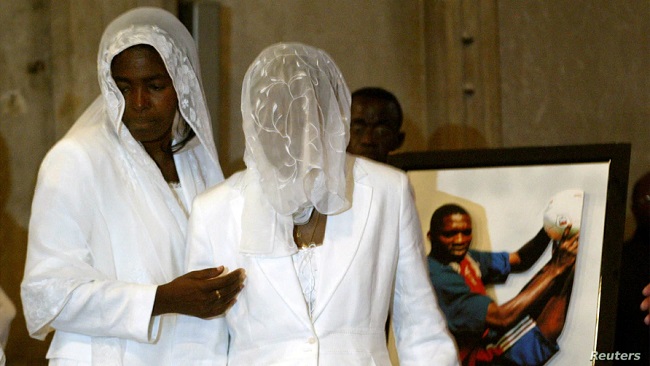 At least 250 widows from across western Cameroon are staging protests to call for an end to cleansing rituals and other cultural practices they say they have been forced to undergo following their husbands’ deaths. The widows gathered to demonstrate in the western town of Bafoussam.

Forty-seven-year-old Amede Djoulde is a member of the Association of Widows, based in the nearby town of Foumban. She says the demonstrations began when a mother of five children was chased from her marital home after her husband died recently.

She says widows are suffering enormously in their community. Women are always accused of killing their husbands and no one seems to consider the pain they go through after losing their life partners.

She says she should be the owner of their matrimonial home because she constructed it with her husband. She says her in-laws did not take into consideration that she and her five children need a home. She says she now lives in her oldest daughter’s house but wants to return to her home.

The women say they oppose practices that include the ritual of being forced to drink water used to bathe their late husband’s body as a sign they did not kill their spouse. The women also say the practice of having to stay with their in-laws for about a year after their husbands die is cruel.

Njingum Ngemnye, a public figure in the village of Koutoupit, says the practices are to cleanse the women of evil spirits brought about by the death of their spouses.

He says tradition gives authority to particular notables to cleanse a woman by shaving her head immediately after the burial of her husband. He says the female siblings of the late husband must accompany the widow to her farm, fetch water and watch over her by accompanying her everywhere she goes.

Seidou Tonta, also a notable (public figure) in Koutoupit, says he is surprised that the women want to abandon traditions intended to protect them.

He says their tradition states that a widow, for her safety and fear of being cursed by her late husband, must avoid having sexual relations and wear only black dresses for up to a year after her husband dies. He says he is upset that many people now believe in the doctrine of Christian churches that says God is against such practices. He says their traditions must also be respected by people who preach Christianity.

Ernestine Essah, the highest ranking official in Noun, an administrative unit where Foumban is located, says the government has been educating communities in order to avoid such practices.

She says the most disturbing issue she has observed in western Cameroon is the inhumane way women are treated when they lose their husbands. She says she has organized several talks and conferences to propagate the rights of women. She says she has asked those who still practice harmful widowhood rights to stop it because it is against the dignity of women and the government forbids such rites.

The government of Cameroon says its western region still has some of the worst forms of cultural practices that undermine the rights of women.