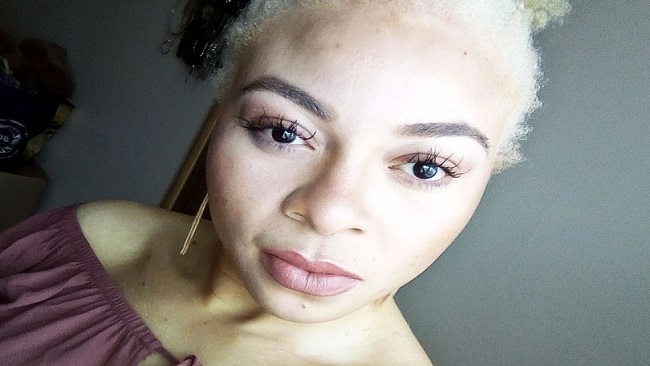 An albino woman taunted because of her skin has defied negative comments from people who believed she was ‘cursed’ by becoming a model.

Christelle Mengue, 29, was born in Cameroon, Africa but raised in Paris, France as her family decided it was best for her safety to live with family there because people believed she was ‘cursed’ by a witch.

But the big move didn’t make it any easier for Christelle because she felt rejected by both the black and white communities.

She spent her teenage years dying her hair and wearing dark make up to mask her white skin after being mocked by bullies.

But she’s now signed with Models of Diversity – who campaign for greater diversity of modelling talent on the catwalk – and acts as an advocate for others with albinism and embraces her skin.

Christelle, who lives in Sutton, Surrey said: “When I was younger, I knew I was different, but I had no idea why – even when I grew up in a white community in France, I didn’t feel accepted.

“I have six brothers, but I am the only one with albinism – perhaps one of my ancestors has it.

“In Cameroon, my family accepted me but the other people in my country thought I was cursed.

“Medics said I was disabled because of my condition because of the lack of melanin.

“My parents decided it would be best for me to live with my family in France, so I moved for a better life when I was five-years-old.

“Throughout my time at school, I was constantly taunted because of my skin, the kids would say I call me ugly, weird or a ghost.

“It got harder when I grew into my teens as the other girls started getting boyfriends and I was always the odd one out.

“I started dying my hair darker and wearing weaves along with putting dark foundation on so I would be accepted as a mixed-race girl.

“I suffered with low self esteem and had no confidence, but I eventually got sick of hiding – my hair was damaged from the dye and the makeup wasn’t my shade.”

At 19-years-old, Christelle was scouted by a French modelling agency and her whole outlook on albinism started to change over time.

She adds: “I grew up without a role model and I never seen anyone like me on TV or in a magazine.

“I had no idea what albinism even was so I took matters into my own hands and began researching and realised I am not the only one.

“People had very low knowledge of that condition .

“I was just starting doing research about my identity. I  wasn’t till I was 23-years-old that I was fully able to define myself as an albino and explain that condition to others.

“It doesn’t affect my brain and I am just like anyone else.

“For my first shoot, I looked back at the photos and realised I didn’t look that bad on photos and began to embrace my skin.

She said: “I used to say I was a light skin mixed race girl but now I couldn’t be prouder of who I am.

“I want more people like me to step out of their comfort zones and become role models for others with albinism.

“I am sharing my story to promote diversity – I hope other people see the calendar and realise anything is possible.”