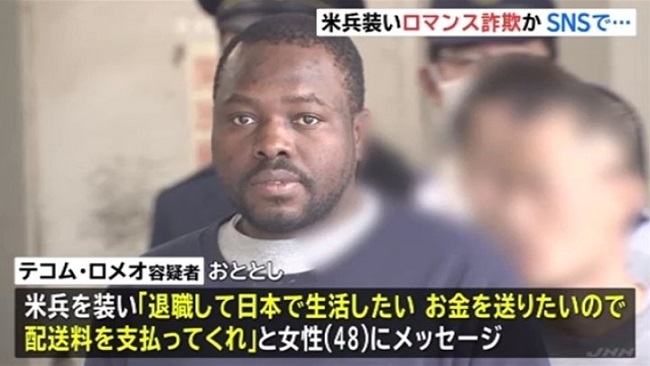 Tokyo Metropolitan Police have arrested a male Cameroonian national who is suspected of posing as an American serviceman online to swindle a Japanese woman seeking marriage, reports TBS News (Feb. 7).

In 2018, Tekom Romeo, 35, communicated with the woman, 48, via a social-networking service whereby he falsely claimed to be an American soldier worth 500 million yen.

During the exchanges, he used a photograph featuring a man in uniform who was not him. “I want to retire and live in Japan,” he wrote. “I want to send you money and for you to pay the shipping fee.”

The suspect then allegedly defrauded the woman out of 1.83 million yen.

Upon his arrest on suspicion of fraud, Romeo denied the allegations. “A Pakistani national requested me to

,” the suspect was quoted by the Tomisaka Police Station. “I didn’t know the money was obtained illegally.”