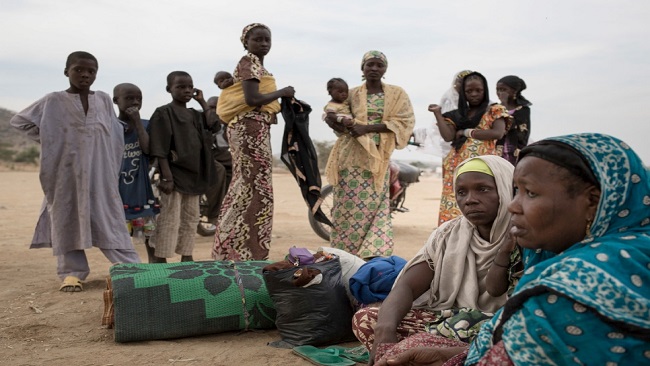 Nigerian refugee children have returned to schools on Cameroon’s northern border as the threat of attacks from Boko Haram Islamist militants has reduced. But some feel it is still not safe enough to return home.

On a bright Monday morning at the government primary school in the Minawao Refugee Camp, thousands of children gather for their morning assembly.

They pray and listen to news about their school, the camp, their host country Cameroon, and their country of origin — Nigeria.

They are among some 75,000 Nigerians, most of them women and children, who fled Boko Haram Islamists to live along Cameroon’s northern border.

But even inside the refugee camp, the fear of Boko Haram attacks kept school enrollment last year to around 10,000 children. Many students were too traumatized to study while security forces also worried the militants could infiltrate the schools.

In the last year, Boko Haram attacks have drastically reduced. And, since the school year began on September 3, the children at the camp’s schools has nearly doubled to 20,000.

Teacher Lawrence Nyamnjo says with only 190 teachers, they are now more concerned about resources than suicide bombers.

“Problem of teachers, infrastructure, even of school kits since the children don’t buy,” said Nyamnjo.

Nyanmjo says they are waiting for the United Nations Refugee Agency to help provide school supplies.

The United Nations Children’s Fund representative in Cameroon, Jacques Boyer, visited the refugee camp schools along with the Korean ambassador. He says they noticed a positive change in the children.

“Four months ago, I was in this same place, these children were sad, traumatized,” he said. “What we have witnessed with her excellency the ambassador of Korea is smiles on their faces. Children, four months ago were drawing people with weapons and drones, now they are drawing flowers, houses, so for us it is important on the psychological aspect that this change occur.”

The Boko Haram conflict has displaced about 200,000 people in northern Cameroon.

But while there has been no major Boko Harm attack in the past year, only about 8,000 Nigerian refugees have felt safe enough to return home.

She says, when it is safe, she dreams of returning to her country to teach friends that Boko Haram’s opposition to western education is wrong.

“I am in group five. I come here for learning. When I finish my school, I will want to be a teacher,” she said.

Cameroon on September third re-opened 40 schools on its northern border with Nigeria that were sealed for four years because of Boko Haram threats.

While the central African state says the Islamist threat has drastically reduced, it warns people should remain vigilant and report any suspects.