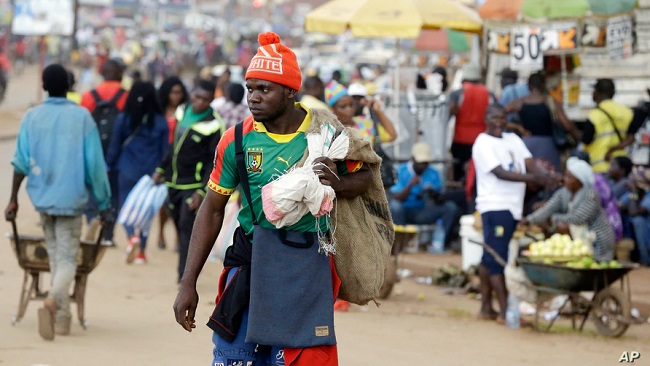 Cameroon says the temporary closure of most restaurants and border trade during the COVID-19 pandemic has dropped food prices by up to 70 percent.  While food sellers are suffering the lost income, cheaper prices have helped some of Cameroon’s poorest to cope during the economic disruption.

After the COVID-19 pandemic forced restaurants to close in Cameroon’s capital, Yaounde, a new way of business emerged to sell the surplus of cheap food.

Trucks that used to deliver large quantities of food to the city’s eateries and hotels now go from street to street, selling fruit, vegetables, and chicken to the general public.

But food distributors like Christoph Nanze say the pandemic is destroying their business.

He says his wholesale buyers have dried up with restaurant closures and the banning of large gatherings and border trade.

Nanze says they are suffering because vegetable, meat and chicken sellers no longer have access to markets in Nigeria, Gabon and Equatorial Guinea.  Since the neighboring countries sealed their borders to stop the spread of COVID-19, he says, food prices have decreased sharply.  Nanze says the price of a 20-liter bucket of fresh tomatoes has dropped from $15 to only $4, while the price of a chicken that weighs 1.5 to 2 kilograms has fallen from $10 to about $3 to $4.

But in poor neighborhoods, where day laborers and laid off workers have been struggling during the pandemic, the cheap food is a blessing.

Among the buyers is 39-year-old unemployed single mother of two, Amina Awah.  She says it is the first time in her life that she can afford to buy a few meals of meat per week for her children.

She says she is very happy that food is now very cheap and poor Cameroonians like her can add chicken to their diet.  Awah says she does not like seeing people infected and dying from COVID-19 but, she wishes for prices to remain low so that the poor can also eat well.

But as the poor like Awah express joy, Cameroon’s farmers trade unions have called on the government to assist them.

He says farmers are also discouraged from producing and, if no government assistance comes soon, Cameroon may face a food shortage.

Tchomb says the COVID-19 crisis has exposed Cameroon’s fragile economy.  If the government does not give financial assistance to farmers and food sellers, he says, their businesses will crumble.  Tchomb says banks that gave out loans to traders should renegotiate the terms because so many people cannot afford to pay them back.

Motaze says the government and Cameroon’s President Paul Biya are very much aware of the difficulties that traders are going through.  He says they are doing everything possible to assist them.  Although the government is already losing close to $2 billion in revenue due to COVID-19, says Motaze, Biya has removed taxes for food stuffs.

Motaze says the government has vowed not to allow the possibility of any food shortages.