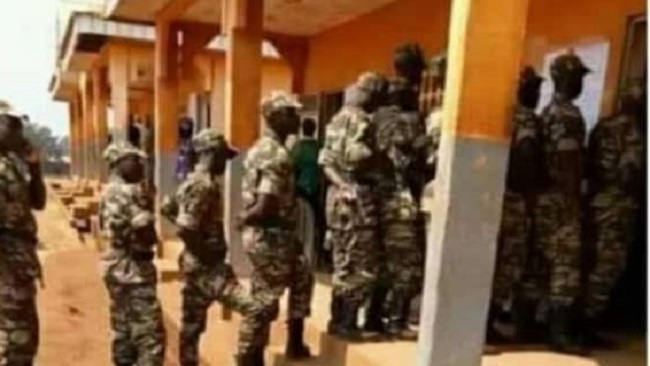 Cameroon’s Twin Elections: How were they won? 0

Cameroon’s so-called advanced democracy has continued its onward march towards a man-made catastrophe despite all the warning signs. While decency, responsibility and transparency are the hallmarks of genuine democracies around the world, Cameroon’s democracy has continued to be mired in corruption, controversy and irresponsibility for more than a quarter of a century.

While the natural tendency for a genuine democracy is to innovate and streamline processes and procedures, Cameroon’s democracy manufactured by its president, Paul Biya, has put the country in the spotlight for all the wrong reasons.

All elections held in the country from 1990 have been marred by fraud and lack of transparency. In 1992, the American election watchdog, the National Democratic Institute (NDI), documented evidence of fraud in the presidential elections and the Biya government declared the famous institute persona non grata in Cameroon.

The acts of fraud during these elections were so crude to the point that even the blind could see them. Elections were organized by the ministry of territorial administration. The minister was a member of government of the incumbent whose cardinal objective in life at the time was to stay in power in order to protect acts of corruption and fraud committed under his one-party state.

Voters’ registration was the responsibility of local chiefs and other government officials who were paid by a government that was still struggling to shake off the one-party hangover. The main opposition party leader was John Fru Ndi, a man who struck fear in the minds of one-party state believers. His supporters were not allowed to register for the elections freely. The presidential election was more of a war than a normal democratic process, with the ruling party preaching tribalism and promoting hate speech.

Anglophones living in many parts of East Cameroon were cut out of the electoral process because their loyalty was obvious. It was the best way to guarantee the incumbent a victory. Many of those who ever got registered never had their voters’ cards and even the receipts issued to them after registration were rejected on polling day.

On voting day, polling stations were changed at short notice. Voters were completely confused. Opposition election officers were refused entry into polling stations. Ballot boxes were stuffed with fake ballots and intimidation by the ruling party was clearly on the menu.

The results were compiled by the ministry of territorial administration and released by the Supreme Court whose judges were appointed by the incumbent. The signs of corruption and fraud were obvious except to members of the ruling party who thought more about their personal interest than about the country’s paramount interest.

Almost 30 years after, the ruling party, the CPDM (Cameroon Peoples Democratic Movement), a party that is only democratic in name, has continued to use the same tactics to perpetuate itself in power. Yesterday’s elections were not different from what Cameroonians have witnessed for close to 30 years.

The context might have been slightly different due to the insurgency playing out in the two English-speaking regions of the country and the general voter apathy because of the past, but the ruling party has  still employed the same tactics to sustain itself in power. The results of yesterday’s elections were known long before the voting took place.

The ruling party had eliminated many opposition parties in many constituencies around the country. All opposition parties fielded only 45 candidates in the parliamentary elections out of 180 seats. This implied that the CPDM had already won 135 seats even without any real voting.

In Cameroon, there is no strict campaign financing laws. The CPDM government grants very little financial assistance to struggling opposition parties for them to be able to participate in the elections. It grants itself the state treasury and uses military and state vehicles for its campaigns. In the two English-speaking regions, government officials used military trucks and armoured cars to go to the regions just to rig the elections.

The objective is not to convince the population, but to demonstrate that elections actually took place across the country. Fuel for the trucks, drivers of the vehicles and maintenance costs are all being borne by the poor taxpayer whose interest is never considered as a priority.

While ruling party officials enjoy all of this, opposition party candidates simply avoid the war zone and only ruling party election officers really go to the polling stations. The outcome of the election is therefore not in doubt.

In many polling stations, only government soldiers voted. Prisoners from other regions were hauled like cattle to the two English-speaking regions for them to vote for the ruling CPDM. In Buea, Bamenda, Kumba, Mamfe and other cities in the two English-speaking regions, many young men were arrested and kept in jail until after Election Day.  They were released after having voted for the ruling party. Cameroon’s advanced democracy is making giant strides; unfortunately it is making giant strides towards dictatorship and monolithic thinking.

The ruling party, known for its Machiavellian mindset, had orchestrated the real fraud, not necessarily in the polling stations, but during the registration process. Three hours after the close of elections, some of its members could be seen celebrating the party’s victory in front of Ayaba Hotel in Bamenda like a group of monkeys that has run into a bunch of bananas.

But ruling party officials in the Northwest region were releasing their own results yesterday and nobody has been arrested or summoned to appear before any constituted government body for them to answer for their reckless behavior. Cameroon’s laws are simply selective, and they never find ruling party officials guilty of any crime.

The ruling party has won by a wide margin in the two English-speaking regions of the country, at least according to the party’s estimates. The population of those regions simply did not participate in the elections. They have been displaced, with more than a million of them living across the country as internally displaced persons, while a similar number is hiding in the bushes or is in Nigeria because of the government’s violent military response to the insurgency.

The population of the two regions also respected the lockdown decreed by the Southern Cameroons Interim Government that is living abroad and this has actually ruffled officials of the ruling party as the internet is awash with videos and pictures of towns abandoned by civilians who totally disagree with the way the regime has ruled the country for more than three decades. But the CPDM will surely score a 100% in both regions.

It is a party populated with people who have many skeletons in their cupboards. This is a party that started off with a slogan that captured the imagination and attention of Cameroonians. Rigour and Moralisation made the party look like a product made in Heaven. But over the last 35 years, Cameroonians have seen more corruption and demoralization spreading across the country like wildfire.

The CPDM might have won the election, but its battle to win hearts and minds, especially in the two English-speaking regions of the country, will be the one that will be the most challenging. The people of these two regions have made up their minds not to listen to the political heresy the ruling party preaches. Despite the victory it has arrogated to itself, the CPDM government, also known as a crime syndicate, will not govern Cameroon in peace.

Cameroonians have become more intelligent and the dignity, for which Anglophones are known, is gradually spreading to other regions of the country. Cameroon is in for a chaotic ride into the future. The road ahead is long and bumpy, and the drivers of the vehicle are old and inefficient. The chances of the vehicle ending up in a ravine are huge. Only the international community can pull this country back from the brink.