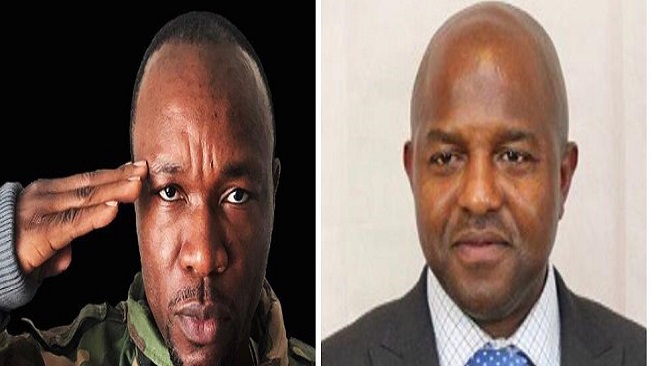 Cho Ayaba and the AGOVC are the SDF of the Ambazonian Revolution! 0

The butterfly thinks himself a bird. Such is the case with the Ambazonian struggle that hundreds of butterflies envisage themselves as parrots. Factionalism is a natural part of the human family but never before has the human community, fighting for the same goal, seen as many factions as in the current Ambazonian struggle. There are more so-called frontline movements in this fight for liberation than followers. One of such groups goes by the appellation of AGovC under the leadership of Dr Ayaba Cho Lucas. Like many of the trivial factions in the revolution, they claim to have all the answers for the Ambazonian people.

The Interim Government of Ambazonia, the major frontline movement, under Dabney Yerima adopted a policy of collaboration with the AGovC and other miniature factions for the greater good of the nation. The unease for many veteran political commentators with such collaboration was the AGovC’s inflated ego, history with the truth, and integrity. Twelve months after the move from the Ambazonia vice president, the AGovC has proven their critics right.

The cunning side of the AGovC with its double speak was already raising concerns within the Interim Government and SCBC TV. The abuse of trust by so-called AGovC activists on the national broadcaster to question the integrity of President AyukTabe wasn’t well received by the elites and elders. Suppressed anger has been the portion of IG sympathisers in dealing with AGovC.

Many within the IG and academic community have raised questions many times about AGoVC comedians and morons passing for activists and spokespeople. But Comrade Dabney was confident that he could tame these unruly knuckleheads.

Earlier this week, Dr Ayaba put out a statement in which he put the final nail into the coffin of the fragile partnership. In saying one thing to the leaders in detention when he was briefed about the pre-talks in Yaoundé and expressing another view in public, the concerns of many Ambazonians about the true intentions and trustworthiness of Ayaba were confirmed. The sole purpose of the AGovC was to propagate and defend Cho Ayaba’s feelings and demands. The elites, elders and discerning Ambazonians find him deeply offensive and a major security risk to the nation.

As a keen observer of the political landscape in Cameroon for the last 4 decades, I am befuddled to see that Ambazonians have failed woefully to pick up increasingly obvious clues on the similarities between the erstwhile sit-tight Chief Scribe of the SDF opposition in Cameroon, Ni John Fru Ndi, and the Jean Bendel Bokassa look-alike of the AGovC called Ayaba Cho Lucas. Is this is a particular trait from Mezam/Santa because both mis-leaders come from this enclave?

The SDF chief managed to successfully eliminate all intellectuals and individuals with a backbone to challenge him in the party and surrounded himself with spineless stooges and truants. Chairman Fru Ndi has never seen collaboration or the unity of the opposition parties in Cameroon as useful except looking through the egomaniac prism of Fru Ndi at the helm because the SDF is the biggest and strongest party. What a mockery! Have we quickly forgotten the many failed attempts at collaboration and unity of opposition parties in Cameroon?

Now enters Ayaba Cho Lucas, the knucklehead and power monger in Norway in a similar political contraption called AGovC/ADF. In mirror-like similarities like identical twins, Dr. Ayaba Cho has eliminated all intellectuals and people with backbones who could challenge his waywardness with spineless, frail and not so manly stooges, some of whom could not even make a single complete sentence in proper English as his henchmen.

He wants to be leader at all cost with the pitiful argument that he has been advocating for the Southern Cameroon’s cause for 32 years. Longevity in the struggle is respected but sound personal achievements, integrity, leadership skills, and a clear vision are revered. The people of Ambazonia want leaders who know where they are going. The Ambazonia people understand that 32 years in the struggle while making the same mistakes is akin to insanity. The nature of our emergency calls for much more than a village celebrity with a long history of divisiveness.

For a long time, many in the IG have discerned the AGovC as a tragedy waiting to happen. Honesty and collaboration holds a vague terror in the small mind of Ayaba and his gang of ruffians. They are deluded. Extremely deluded! Our people say when the moon is shining; the cripple becomes hungry for a walk. The AGovC is inundated with many intellectual and academic cripples who count the Queens Language in the past and present continuous tenses. The adoption of Pidgin English as a language of communication in this revolution has saved them excessive embarrassment by masking their deficiencies.

My sources tell me that time without number, Ayaba has sent representatives to important collaboration meetings with the IG and third parties because he is too significant to make appearances. What planet does he live in? The delusions of grandeur in the AGovC are tragic. They believe in their own propaganda which is a dangerous disorder. These paper tigers and social media warlords are possessed and self-absorbed in their illusions.

In the Southern Cameroons of pre social media, AGovC characters would be nowhere close to political leadership. Their opinions would be ruthlessly dismissed. Their infantile stubbornness, naiveté and pride are their greatest undoing. Ayaba in particular, has not got complete control over his character and temperament which is a huge worry. His character is tremendously flawed and millions in this revolution trust him not.

He is ruled by one passion; to hate everything that every other leader does, especially Sisiku AyukTake. He is bitterly consumed by not being elected the leader of the Southern Cameroons revolution.

Ayaba Cho just like Fru Ndi has been the main stumbling block in all attempts at collaboration of forces within the Ambazonian Revolution. Facts and history are always stubborn to shove aside. SCYL breakup, 4th Conclave disruption, Dadi go-in-alone, The ARCC, The Washington DC collaboration conference, the ASC, the SCLC and the current IG-Care-AGovC charade, all attempts at collaboration have failed woefully. Why? I will intimate that you ask Dr Know-it-all Ayaba because just like the Chief in Ntarikon, Ayaba and the AGovC/ADF cynically believe they have the biggest and strongest forces on the ground. Although with no evidence and no political organization, he believes he has all the answers to the Ambazonian revolution. What a delusional comedian!

The King of Ntarikon has occupied the helm of the moribund political party for over 30 years. Ayaba has been at the helm of his own moribund organization for over 3 decades too. Posterity will not treat us fairly if we allow another Fru Ndi-like character within our political spectrum. It’s time to take a deeper look into the chameleon-like, disruptive and manipulative nature of Dr. Ayaba Cho Lucas.