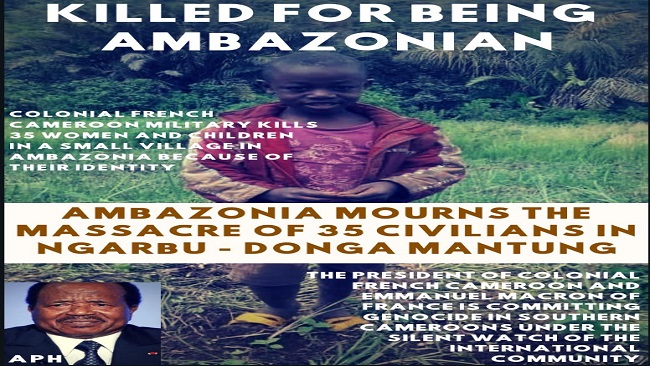 The “Valentine’s Day Massacre” of pregnant women, babies, young children and elderly Southern Cameroonians by the Cameroon military in Ngarbuh is the most blatant demonstration yet of crimes against humanity and genocide against Southern Cameroonians, as noted by some. Per eye witness reports, soldiers visited the village in the early hours of Valentine’s Day and proceeded to sequentially slaughter citizens, burning down their homes and burning some alive. By the end of this massacre at least 35 people were confirmed dead including, as confirmed by the United Nations, 15 children and two heavily pregnant women.

The Coalition for Dialogue and Negotiation (CDN) joins the rest of the world in strongly condemning these horrendous and barbaric acts, which unfortunately is not the first of its kind by the army of the Government of Cameroon. While this massacre, like the previous ones, has received worldwide condemnation and the sympathy of the international community, the Coalition strongly believes it’s time for world leaders to take concrete actions to end this armed conflict and prevent further degeneration of an already dire humanitarian situation.

The Coalition strongly urges the United Nations Secretary General, Mr. Antonio Gutteres, to convene an emergency Security Council meeting to directly address the root causes of this conflict. The Coalition also urges the governments of the United States, the United Kingdom, the German Federation, Canada, France and most especially the African Union, to take a more proactive role in seeking a permanent negotiated solution that addresses the root causes of this armed conflict.

The Coalition reiterates its stance for an inclusive third-party mediated negotiation that addresses the root causes of the conflict, as the only sustainable means of resolving the Southern Cameroons conflict. As such, the Coalition believes that the International Conference on the Armed Conflict in the Southern Cameroons, scheduled for March 19-21, 2020 in Washington DC would constitute a step in the right direction.

About the Coalition for Dialogue and Negotiations

The Coalition for Dialogue and Negotiations (CDN) is an international non-governmental organization (NGO) with the specific goal of facilitating dialogue and negotiations towards ending the war in Southern Cameroons. CDN is made of professionals from all works of life and over 20 partner organizations worldwide advocating for an end to the war. CDN members work with its partners to strengthen international involvement in resolving the conflict and building durable peace in the conflict affected territories.