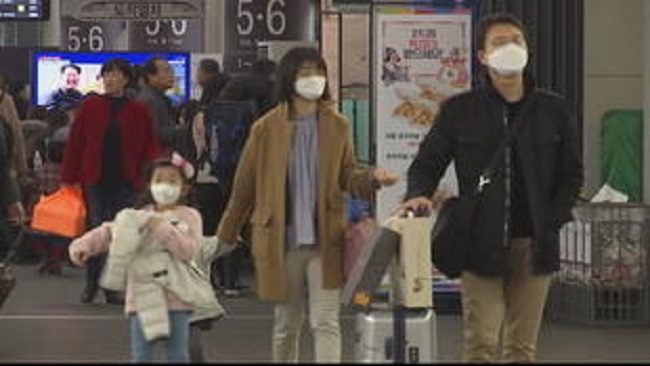 A man has died of the coronavirus in the Philippines, the first confirmed fatality outside China.

The patient was a 44-year-old Chinese man from Wuhan, in Hubei province, where the virus was first detected.

He appeared to have been infected before arriving in the Philippines, the World Health Organization (WHO) said.

The US, Australia and an increasing number of other countries have barred the arrival of foreigners from China and are requiring their own citizens to be quarantined.

The number of coronavirus cases worldwide has overtaken that of the similar Sars epidemic, which spread to more than two dozen countries in 2003. But the mortality rate of the new virus is much lower, suggesting it is not as deadly.

What do we know about this death?

The man travelled to the Philippines from Wuhan, via Hong Kong, with a 38-year-old Chinese woman who also tested positive last week, the Philippines Department of Health said.

Officials said he was admitted to a hospital in the capital, Manila, where he developed severe pneumonia.

The man is thought to have had other pre-existing health conditions.

Rabindra Abeyasinghe, the WHO representative to the Philippines, urged people to remain calm: “This is the first reported death outside China. However, we need to take into mind that this is not a locally acquired case. This patient came from the epicentre of this outbreak.”

According to local news outlet Rappler, Health Secretary Francisco Duque III said the patient was “stable and showed signs of improvement”, but his condition deteriorated rapidly over 24 hours.

“We are currently working with the Chinese embassy to ensure the dignified management of the remains according to national and international standards to contain the disease,” Mr Duque said, adding that the man would be cremated.

The Department of Health was now trying to track down people who were on the same flight as the man so that they could be quarantined, he said, as well as any other people the man and woman may have come into contact with, such as hotel staff.

The man’s death was confirmed shortly after the Philippines announced it would immediately halt the arrivals of any foreign travellers from China.

It had previously restricted only those from Hubei, which is at the epicentre of the outbreak.

What is the latest from China?

Authorities said 45 more deaths were recorded in Hubei province by the end of Saturday, bringing the death toll in the country to 304.

Nationally, there were 2,590 new confirmed infections. The total number of infections in China is now 14,380, state TV quoted the National Health Commission as saying.

Estimates by the University of Hong Kong suggest the total number of cases could be far higher than the official figures. More than 75,000 people may have been infected in the city of Wuhan, which is at the epicentre of the outbreak, experts say.

Which countries are restricting arrivals?

The US and Australia have said they will deny entry to all foreign visitors who had recently been to China, where the 2019-nCov strain of the coronavirus first emerged in December.

On Sunday, South Korea said it would bar entry to foreigners who had recently visited Hubei.

In the US, citizens and residents returning from Hubei will be quarantined for 14 days. Those returning from other parts of China will be allowed to monitor their own condition for a similar period.

The Pentagon said it would provide housing for 1,000 people who may need to be quarantined after arriving in the US from abroad. Four military bases in California, Colorado and Texas would provide up to 250 rooms each.

Another confirmed case in the US on Saturday – in Massachusetts – brought the total number there to eight.

Australia said any of its own citizens arriving from China would also be quarantined for two weeks.

There have also been a number of evacuations from China as foreign governments work to bring their citizens back.

What restrictions are there in China?

Wuhan is in lockdown and other major cities across the country have suspended non-essential business.

The mayor of Huanggang – a city of six million people to the east of Wuhan – has warned that the number of cases there is set to spike in the coming days, state media said. Up to 700,000 people had returned to the city from Wuhan before travel out of Wuhan was banned.

Huanggang and the eastern city of Wenzhou have imposed draconian restrictions on residents, only allowing one designated person per family to leave home once every two days to buy food and other supplies, Chinese media reported.

Hubei officials have extended the Lunar New Year holiday to 13 February and said that marriage registrations would be suspended in an effort to discourage public gatherings.

Meanwhile, hospital workers in Hong Kong have voted to go on strike from Monday unless the territory’s border with mainland China is completely closed. The Hong Kong government has refused to do so, citing WHO recommendations to introduce screening measures at borders instead.

Do the travel bans work?

Global health officials have advised against the bans.

“Travel restrictions can cause more harm than good by hindering info-sharing, medical supply chains and harming economies,” the head of the WHO said on Friday.

The WHO recommends introducing screening at official border crossings. It has warned that closing borders could accelerate the spread of the virus, with travellers entering countries unofficially.

What other international action has been taken?