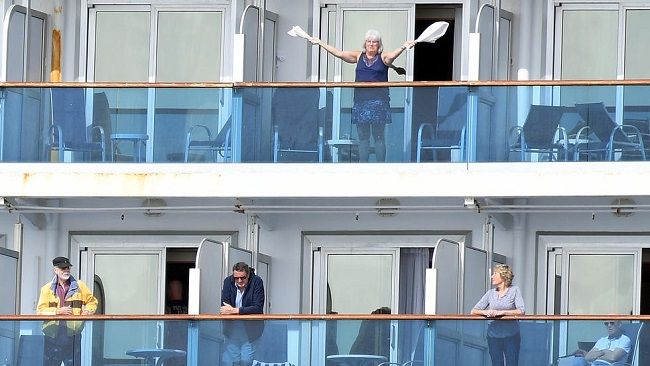 Thousands of people stranded on a cruise ship off California after an outbreak of the coronavirus were due disembark Monday in what officials said would be an “unprecedented and difficult” landing.

No time has been given for the disembarkation Monday, but fences have been put up at Oakland port and buses and flights were lined up to ferry the more than 2,000 passengers, who will go into treatment, be placed in quarantine or returned to their home countries in the case of non-US citizens.

The Grand Princess, which has 21 confirmed novel coronavirus infections among its 3,500 passengers and crew, appeared to be moving toward the coast Monday, according to ship tracker Cruisin.

It had been sitting off the coast of nearby San Francisco for four days while authorities figured out how to get the people safely ashore without spreading the potentially deadly virus.

Local television stations showed footage of tents being set up on the quayside and a line of portable toilets as officials prepared for the operation.

“Disembarkation will commence in order of priority, as defined and directed by both state and local authorities,” Princess cruises said in a statement on its website.

“The US Coast Guard will be sending California Health & Human Services teams to assist with medical triage, screening and interviews, and prioritizing those who require the most acute care. To avoid delays, testing will be conducted when guests arrive at their onward destination,” it added.

Passengers who don’t require acute care will be quarantined for 14 days at US military bases.

The company said the crew would remain onboard after the passengers had disembarked and the ship would then leave San Fransisco bay. It said a plan for crew quarantine was still being worked on.

Margaret Bartlett, a 77-year-old British woman who was confined to a cabin with no balcony told the BBC she was going “stir crazy.”

“The food is rotten and terrible and we have to fight for it, it is not enough,” said the grandmother from Lancashire, who said a passenger 10 cabins down from her has died.

Medical officers boarded the ship late Sunday for what California Governor Gavin Newsom said would be a “two-three day process,” with the start time based on currents and tides.

“We are still working out the enormity of complexity of making sure we prepare the site and … prepare for a quick turnaround,” he said late Sunday.

President Donald Trump said on Friday that he would prefer to keep the passengers confined on the ship because letting them off would increase the number of infections in the United States.

“I like the numbers being where they are. I don’t need to have the numbers double because of one ship that wasn’t our fault,” Trump said, but added he would leave the decision to Vice President Mike Pence, whom he has appointed to head the coronavirus taskforce.

The United States has at least 22 deaths from the coronavirus and 566 confirmed cases, according to a Johns Hopkins tally.