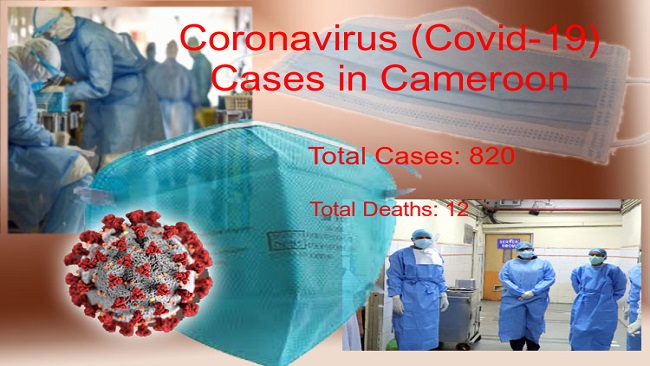 Cameroon government lies and deception over the COVID-19 pandemic continues to thrive on state radio and television (CRTV) while hundreds are dying. A secret document from the Governor of the Littoral Region pleading that Yaoundé should make available 100 coffins to bury abandoned bodies of those killed by the virus has greatly contradicted latest figures published by the Minister of Public Health claiming that the nation has recorded only 60 deaths throughout the national territory.

Cameroon Intelligence Report correspondent in Douala reported late yesterday that the true figures were 80 times greater than those quoted by the Biya administration. A senior medical practitioner in Yaoundé who spoke to us at the time of filing this report blurted out the truth. He observed that “Every hour in Douala and Yaoundé, 100 people contract COVID-19 and every 20 minutes a person loses their life due to the virus.”

Facing a major health crisis that the despotic regime was ill-equipped to combat, the 86 year old President Biya has disappeared from the political scene and his so-called Prime Minister and Head of Government; Dr Dion Ngute has characteristically resorted to blaming the crisis in Southern Cameroons, rather than Biya’s own manifest incompetence.

The virus was first detected in an Air France flight that transported the Speaker of the National Assembly, Cavaye Djibril from Paris to Yaoundé. Another Air France passenger plane reportedly flew hundreds with the virus from Paris to Douala. The visiting French citizens and the members of the Francophone diaspora almost certainly brought the infection to Cameroon.

The government in Yaoundé staged a rerun of parliamentary elections in Southern Cameroons and this outrageous decision quickly spread the virus all over the Northern Zone of Ambazonia. Now the real level of contagion in Cameroon has catapulted the country to the top of the list of Africa’s worst-affected nations.

In response to the coronavirus crisis, WHO instead shipped 14 posh vehicles to the Francophone Beti Ewondo regime while the Swiss government made a 3 billion FCFA donation. But an official from the Cameroonian Health Ministry told our undercover reporter in Yaoundé that the vehicles and the money from Switzerland have all been handed to the military for the war in Southern Cameroons.

The pandemic is now sweeping across Cameroon, overwhelming hospitals, and leading to the surging death toll. The Rapid Intervention Battalion (BIR), the Francophone dominated army, the gendarmerie and the police have diverted almost all of the available face masks, sanitizers, protective clothing and other key medical supplies, for their own personal use and for the use of CPDM regime barons and their families leaving Cameroon’s doctors and nurses with little or nothing to protect themselves or to treat the public.

Reports from Douala, the hub of the Cameroon coronavirus outbreak, show that 20 to 40 people are dying of COVID-19 every day and mortuaries can no longer deal with the number of abandoned corpses.

Despite the need for social-distancing, President Biya recently lifted the ban on bars and drinking parlours undermining the country’s Health Ministry lockdown provisions and exposing the government’s total ineptitude in dealing with the crisis.

Such is the level of outrage and confusion that Cameroonians have been flooding into the Roman Catholic Archdiocese of Douala, where Archbishop Samuel Kleda claims he has found an herbal cure for COVID-19.

Kleda told state media CRTV on April 25 that he had treated several dozen people, including eight medical staff members, for conditions affecting their respiratory systems, just like the coronavirus does.

Kleda, speaking via a messaging application from Douala, said he could confirm that his 30 years of medicinal plant research experience, especially on herbal treatment, had enabled him to find a cure for COVID-19.

He said he was very happy because everyone who had taken the herbal remedy had been cured of COVID-19.  He added that that his goal as a servant of God was to help poor and suffering people, and that was why he gave away the cure, which he named Essential Oils, free of charge.

Last week, the Cameroonian government sent a team of researchers and doctors to determine the validity of Kleda’s claimed cure. Public Health Minister Malachie Manaouda said the government’s support would be determined by the outcome of the investigation. He said if Kleda was proven to be right, the government would make it more widely available for COVID-19 patients.