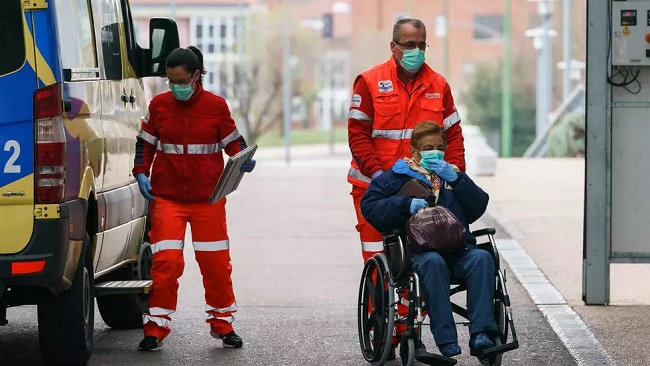 The sun is only just rising in Berlin but Lothar Kopp, 65, is already standing in line outside a clinic in the district of Reinickendorf.

Along with a handful of mask-clad people standing two metres apart, he is here to give a blood sample — for antibody tests in the hope of finding out if he has previously contracted the coronavirus and since developed immunity.

“If I’ve already had corona then I’m not infectious,” said Kopp, hoping to test positive for antibodies as it could allow him to visit his elderly mother without the risk of spreading the disease.

As nations around the world look to ease curbs on public life, some experts have mooted the possibility of so-called “immunity passports” to allow those who have antibodies to return to work first.

In Germany, tens of thousands of tests have been performed and large studies are ongoing.

Elsewhere in the world, efforts are also under way to determine the so-called level of immunity in the population.

New York Governor Andrew Cuomo said last week that the state will be launching tests “in the most aggressive way in the nation” to find out how many have already had the disease.

In a rush to catch up with testing, the US regulator had even taken the extraordinary decision to allow commercial manufacturers to market their tests without formal authorisation.

But experts including from the World Health Organization have urged caution over the accuracy of the nascent tests.

Among the unknowns of the virus is how long immunity could last — meaning that even positive antibody tests may not be meaningful for long.

Urging prudence, a WHO spokeswoman noted that there is “much discussion” over the antibody tests.

But “once we have validated tests we may still not know how well a positive result correlates with protection against disease or for how long the protection will last,” she told AFP.

Matthias Orth, a board member of the Professional Association of German Laboratory Doctors (BDL), said inaccuracies are a big problem.

People can test negative even if they have had COVID-19, he said.

“There are also quite banal coronaviruses that do not cause serious illness, and they can give a positive result.”

As for so-called rapid antibody tests — home kits that extract blood from your finger and promise a result within 15 minutes — Orth’s verdict: “They’re nonsense.”

More accurate tests will come within weeks, he said, but he stressed that “it’s a little too early to give patients a clear statement that they are definitely immune”.

Nevertheless, the studies, including one that started in Munich over the weekend with scientists picking 3,000 households at random to test for antibodies, are being closely watched.

A separate study is ongoing in Gangelt, in the Heinsberg district — where Germany’s first major cluster of infections was uncovered. So far, researchers have determined that 14 percent of the population had previously been infected.

Beyond studies, several pharmaceutical companies in Germany have also begun marketing such antibody tests — which must be analysed in a laboratory.

And around 70,000 tests have so far been processed by 54 laboratories, according to the ALM association of accredited medical laboratories.

Doctor Ulrike Leimer-Lipke of the Reinickendorf clinic, which has been offering antibody tests since mid-March, said: “I think it makes a lot of sense, because this way we can find out if people have immunity.

“It is very important for people if they have a grandmother or a mother or father who they care for, to know if they are already immune.”