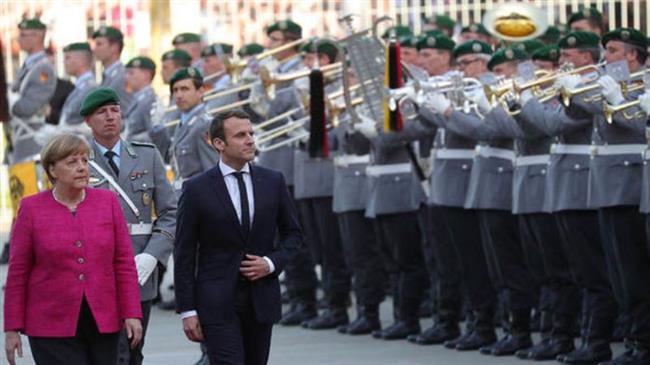 French President Emmanuel Macron and German Chancellor Angela Merkel presented a joint plan to spur EU recovery from the coronavirus crisis on Monday, after weeks of debate over how to deploy billions of euros needed to end a painful recession.

In a joint video conference, Macron and Merkel called for the creation of a 500-billion-euro ($543 billion) recovery fund able to offer grants to the countries and regions hardest hit by the coronavirus crisis.

The leaders of France and Germany also said they were proposing to authorise the European Commission to borrow money on financial markets in the European Union’s name, while at the same time respecting EU treaties.

Macron said this was the first time France and Germany agreed to let the EU raise debt jointly, calling this a “major step foward”. He insisted that money from the recovery fund would be made available in the form of grants and not loans.

Merkel said that in all, EU member states and the bloc’s executive would mobilise a combined sum of three trillion euros to cushion the economic impact of the coronavirus pandemic.

She said France and Germany were also in favour of reforming the EU’s merger and competition rules so that the bloc can create stronger European champions after the coronavirus crisis.

Europe is just beginning to emerge from lockdowns put in place to slow the spread of the coronavirus, which has taken a huge bite out of national economies. But divisions among EU members on how to craft an overall response have hampered comprehensive action so far.

Macron said on Monday that the Franco-German initiative was the fruit of extensive talks with other EU member states, including Italy and the Netherlands, which have been at loggerheads in recent weeks.

The recovery debate has again exposed the bloc’s divide between northern countries leery of exploding budget deficits, and hard-hit southern countries like Italy and Spain that are desperate for more spending.

The eurozone economy overall is forecast to contract by a whopping 7.7 percent this year, but the damage could be worse in Italy and Greece, which could see their economies shrink by nearly 10 percent, prompting a cascade of bankruptcies and job losses.

While the European Commission still takes time before presenting its own plan, Emmanuel Macron and Angela Merkel unveil their joint proposal for a 500 billion euros for the #Recovery Initiative.

European sources told AFP last week the Commission would lay out its plan toward the end of May, hoping to reconcile the opposing objectives of providing financial firepower – and proving European solidarity – without giving governments a blank check that would expose the entire bloc to gaping budget deficits.

Commission president Ursula Von der Leyen has not given a specific figure, but has said the plan would be linked to the EU’s regular budget and funded in part by the commission borrowing on financial markets.

That would require European Parliament approval as well as a summit meeting of member states to give a green light on how the funds would be used, and the terms for their reimbursement.

The European Central Bank has also promised to do “whatever is necessary” to help weather the crisis, including a 750-billion-euro scheme to buy government bonds for cash-strapped nations.

However, that has proved problematic after Germany’s Constitutional Court attacked the ruling, potentially limiting Germany’s participation.