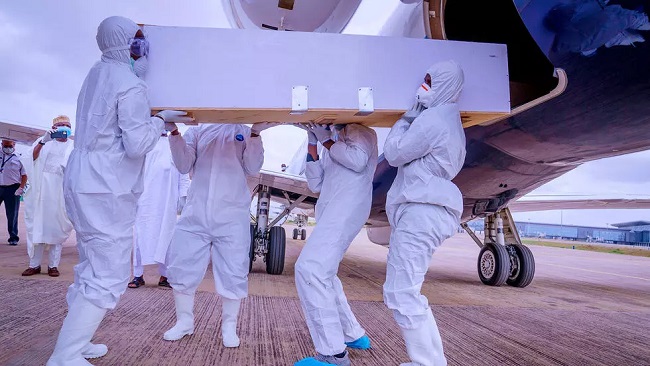 Covid-19 pandemic responses have suddenly become the major security challenge in all states. Sudden overwhelming need for medical infrastructures for unpredictable large number of patients in life threatening situations, have shown the weakness of most states’ medical emergency architecture. With leading states like United States, France and England buckling down under the stress of this pandemic, nations with failing security structures are expected to experience devastating consequences without outside help.

Nigerian state security environment in the pre-Covid-19 era was predominantly unstable. Three states –Borno, Adamawa and Yobe are reportedly under occupation by ISWAP and Boko Haram Islamic groups Rebels. Reports from Northwest and North central regions is littered with looting, raping and killing by bandits, the whole south is under threats of political uprising  and constant murderous attacks from Fulani Herdsmen.

Nigerian security forces are reportedly overwhelmed, with Nigerian Army in security operations in over 34 of the 36 states in the country. Policing capabilities in Nigeria are mostly elite security based. Catering to the needs of the political class and the less than 5 percent elites. Most locals rely solely on relatively unarmed Private Security Personnels (PSPs) for securing their homes and offices. High occurrence of resort to self-help by locals, leading to extra-judicial mob killing and burning of crime suspects paints the picture of public perception of state judicial processes.

Political tensions fuelled by publicly acclaimed ethnocentric and nepotistic leadership have led to high level of ethnic division in a state with over 300 nations. Regional groups like the Northern, Arewa; Southwest, Oduduwa; Southsouth, MEND and SouthEast, MOSSOP; are in full fledge militant agitations for national independence.

State’s revenue from crude oil and agriculture plunged by over 40 percent in the period between 2014 and 2019. Recent huge depreciation in global oil prices from above $40pb in December 2019 to less than $30pb in March 2020, has equally depleted national resources. Cutting short national revenue to about less than 50% of budget revenue target in 2020.

Given huge loss of resources, growing casualties from growing Civid19 pandemic coupled with weakening government control of security in some part of the country, national response to Covid19 pandemic is erratic, at best uncoordinated. Lockdown as covid19 control measure have failed in most cities in the state. Government in avoidance of citizen revolts as crime and violent acts, needing federal government intervention spiraled out in major cities, relaxed lockdown and allowed the public to return to work last week.

Expert positioned that economic loss after 8 weeks of continuous lockdown in Nigerian major cities run into millions of Dollars daily. The loss to the Small and Medium Enterprises in market shares might not be regained without the injection of viable stimulus package. The approval of a 500billion Naira economic stimulus package for SMEs by the National Assembly, was hailed by most observers, yet some few voices still warned that it might be too little late. Addressing the short-run problem in the sector might need four times that figure and that was based on the premises of equity and justice in sharing processes.

Given Covid19 infection rates continuous unchecked growth in Nigeria despite low testing rate -over 300% weekly increases were recorded by NCDC since the third week of April- despite full lockdown in major cities till 4th May, 2020 when lockdown was relaxed-and experts warns of lockdown removal leading to higher infection in the state, increased pressure on the health infrastructure in the country might lead to breakdown in law and order. Pockets of protests and disorderly behaviour have been reported in some northern cities like Gombe and Kano where public education on the pandemic remain low.

Security analyst positioned that due to government concerted response to this pandemic, security of lives and property has been neglected and most state’s resources diverted to this source. Government forces offensive against the Boko Haram and ISWAP has faded out of public discus as almost 90% of local news are currently dedicated to the Covid Response Situation Reports.

Increased criminal activities during lockdown in Lagos and other big cities reveals the need for more security resources in Nigerian homeland, but overstretched state’s resources obviously cannot financed such expansions. Attempts by some states government to increase security capacity through recruitment of locals as vigilantes and security corps was set aside as the new challenges of pandemic became the new security challenge.

Nigeria is home to over 200 million people with over 85million in abject poverty according to UN’s 2019 statistics. WHO in its assessment of Nigerian health capacities, declared Nigeria a high-risk environment for Covid19 Pandemic infection since March 2020. Given the overview of the reported situation in the state, it can be posited that the 4000 infection rate as at 5th of May, 2020 is a tip of the iceberg. Facts point at impending breakdown of law and order due to public panic when the big numbers hit Nigerian Covid score sheet.

There is urgent need for direct international intervention in Nigerian health infrastructure development to meet the expected sharp rise in pandemic victims. The state resources though given a lifeline of over $3million by the IMF last week need more resources to manage all sectors of the economy and offset lost oil revenue as a matter of urgency. The government need to refocus on its war with the terrorists and bandits making life uneasy for its citizens hence regional ethnic armies may develop in already impatient regions to secure their people. The economic loses of businesses during these lockdowns will surely lead to loss of businesses and jobs -in a country with over 35% youth unemployment figure- this is a perfect recipe for violent riots and increased criminal activities. International NGOs have a duty of care to respond to the impending implosion of the Nigerian State and be on the ground before the largest humanitarian situation occurs.

The time for concerted actions is now. Let all come together and support the tottering giant of Africa, before it falls and splash to smithereens the surrounding states and bring African economy to its knees.