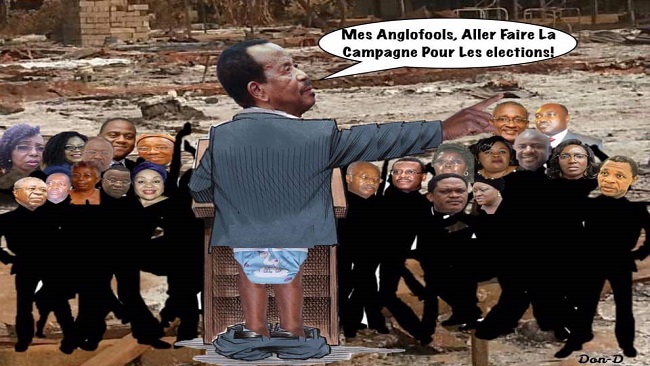 As China fights a vast threat that has already killed some 300 people, Cameroonians are also engaged in a struggle that has consumed millions.

China’s virus is natural and the authorities are making a conscious effort to limit its spread, though the stubborn virus has gone global and it is likely to reach many parts of the world with relative ease due to globalization.

In Cameroon, the CPDM, the country’s state party which is more dangerous than the Chinese version of the Coronavirus, has ruined the state.

In 38 years, the party has morphed into a consortium of crime syndicates made of the same mould as the Sicilian Mafia.

The crime syndicate has wasted huge financial resources on programs that have never delivered any results.

Over the last three years, the ruining and ruling CPDM has killed more than 5,000 people in Southern Cameroons, making it a more dangerous strain of the Coronavirus.

In East Cameroon, more than half a million people have died due to hardship and corruption. Thousands of women have died while in labor and an unknown number of children have disappeared because of neglect.

State resources are owned by the party and it conducts itself like a belligerent monarch who only gives you something when you praise it.

The party is designed to humiliate and dehumanize even its own members.

You must be corrupt and prepared to take humiliation for you to rise in the party. There must be huge skeletons in your cupboard for you to be a recognized as a good member of the party.

The party has impoverished its own people to the point where millions have to bow to the party leadership as Angels do to God to have something to eat.

It is a party without a genuine development plan. As far as this party is concerned, it is normal for a mechanic to be appointed as a health minister.

Recent appointments have seen teachers being appointed as delegates of agriculture, drivers have been appointed as translation service heads and stark illiterates have become regional planning experts. It is not a surprise that the country is making giant strides backwards.

Well, many Cameroonians are now running away from this Coronavirus that mostly attacks the state treasury.

With fake elections announced for February 9, 2020, it is clear that the few coins in the country’s coffers will vanish.

The CPDM is the only party on earth whose members don’t pay their dues. The entire country pays into state coffers, and the virus consumes everything.

As China seeks solutions to its own virus, so too are Cameroonians of goodwill struggling to eradicate the CPDM, this virus that has dehumanized Cameroonians and underdeveloped the country.