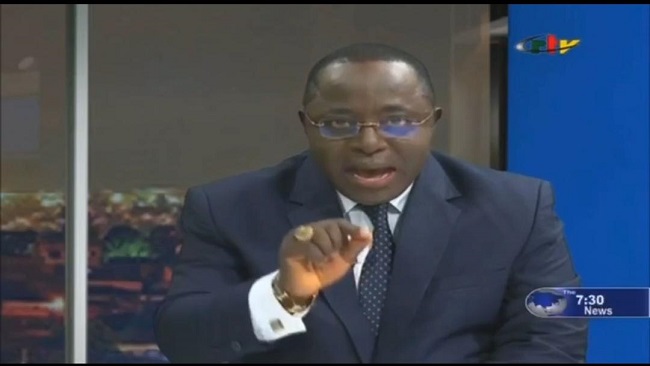 CRTV: Ashu Nyenty and the rise of nauseating political sycophancy 0

There is an African proverb that says that only a fool tests the depth of a river with both feet. Despite the availability of wisdom to help many in society, there is always a fool who, out of greed, will want to test the fury and frustration of a people impoverished and emasculated by corrupt authorities. The latest tragedy of a man attempting to rewrite history is a certain scum journalist who is vertically and horizontally challenged and goes by the name Ashu Nyenty. To seek relevance, political and career promotion, he took to Cameroon’s national broadcaster, CRTV, recently to insult the sensibilities of 25 million Cameroonians by uttering insulting flattery upon a public failure and a monument of embarrassment. Ashu Nyenty spewed that Paul Biya, a man responsible for running a prosperous nation to the ground, is a blessing to his people and Cameroonians are lucky to have him as their head of state.

In the video, which is now viral, Ashu Nyenty justified his qualifications as a half-baked clown on a national platform with a megaphone and nothing constructive to say. Because Ashu Nyenty only cares about himself and represents such falsehood and shameless political and career ambition at a time when the Butcher of Mvomeka is killing thousands of Southern Cameroonians, we, of the Cameroon Concord News Group will focus on his person. He must know that his sycophancy and disgracefully deranged support and flattery of a first-rate criminal is intolerable.

Cameroonians hardly suffer fools gladly and their reaction towards the Ashu Nyenty Comedy of helplessness speaks to the anger in many Cameroonian minds. The current anti-Ashu Nyenty alliance now in Cameroon is a remarkable testimony to his capacity to inspire revulsion from his words of dishonesty, absurdity, and flattery. He is a disgrace and has irresponsibly and purposefully put the lives of his family members in the county of Manyu in the Southern Cameroons at risk. Ashu Nyenty is also now an embarrassment to all GHS Mamfe alumni and he must be treated as such.

Even if one concedes Ashu’s right to free speech and opinion, one must marvel at his motive for such carelessness in act and repugnance in words considering he suffered the ignominy of being expelled from the University of Yaoundé for deception and delinquency. His subsequent mutation and reappearance at the University of Buea with an alteration to his name did not safe him as he was apprehended and expelled again. His deception, as witnessed in his now famous video, is not a fluke but a character flaw. His dismissal from The University of Buea was reported in the Weekly Post by Soter Tarh Agbaw-Ebai who is now Cameroon Concord News Group’s Editor-in-chief and Chairman.

Cameroonians are cursed to have such inept calamities passing as PhDs and journalists.  It is entirely clear that Ashu Nyenty possesses a questionable intellect and a warped mind. He counts his English during his boring shows on CRTV and presents with neither finesse nor  structure and has set the record for having videos on YouTube with less than 20 views after ten months.

Ashu Nyenty, one way or another, will go down in infamy as a man who took flattery to the gutters and septic tank of journalism for calling a dying diaper-wearing demagogue a blessing. If any doubts were left about Ashu Nyenty’s place of dishonour in history for his sightless surrogacy, they have now been erased. The video is an almost unimaginable buffoonery and inexcusable idiocy in insinuating that Cameroonians are blessed to have a stationary and brain-dead clown as their leader.

Many journalists and critics in Cameroon have all but abandoned their professional standards because the CPDM poison has spread far beyond their ability to ignore. Journalism and standards in public office and the truth in Cameroon are in intellectual and moral life support. Several distorted and stunted Anglophone comedians are holding briefs for the CPDM crime syndicate. They have popped up around Yaoundé and on social media in recent years, each seemingly more irritating than the other but this intellectual lilliputian called Ashu Nyenty is fast becoming the worst of them all.

Today, in what is meant to be a channel for candour and facts to the people of Cameroon, CRTV is a shameless public relations department of the CPDM crime syndicate. It is a dull caricature of twenty-first century broadcasting, characterised with mediocrity and rotten to the core with criminality, meaninglessness, and incompetence. Unfortunately, in a country where the best brains have been killed, are in prison or in exile, one must accept the reality that the chaffs are now running the show with astonishing ineptitude. And so, we are cursed with the Ashu Nyenty(s) of this world.

Media illiteracy in Cameroon is a huge problem but the media’s ability to inspire disgust by airing absurdity, falsehoods, CPDM nonsensical adulation is curiously astonishing. How many killings of Southern Cameroonians can people like Ashu Nyenty tolerate, excuse, and ignore? How much injury by Biya and his thugs to the Cameroon political space does he quantify and qualify as a blessing?

Cameroonians watched in disbelief and horror as the pint-sized so-called journalist inspired revulsion in his short video of feigned flattery of a monster whose own close collaborators agree in private that he is an abject failure. Calling his sickening utterances in the video intellectual and professional is grossly immoral and irresponsible.

Is his goal to speak truth to power or to flatter those in power? Is his goal to stand by the principles of the law he claims to have studied or to seek relevance and career promotion? A few hundred miles away in Accra and Abuja, journalists and the press are holding their respective governments responsible.  The Cameroon government has always been lucky that in a country where poverty has stripped nearly all its citizens of their dignity, honesty has been dumped into the latrines.

It is now painfully clear that Ashu Nyenty is seeking political favours within the high office of the CPDM crime syndicate, but he must heed the warning of Shakespeare that “this above all: to thine own self be true, and it must follow, as the night the day”. Ola Rotimi wrote in The Gods are not to Blame “if crocodiles eat their own eggs, what would they do to the flesh of a frog?”. Let him look at the Kondengui Maximum Security Prison and reflect on those words.

It is not hard to understand why so many in the Cameroons have chosen not to go along with the CPDM’s core principles of theft, deception and flattery designed to keep a dying despot in office. Ashu Nyenty must know that a career that is complicit in undermining the values of integrity and academic uprightness does not mean much.

Unfortunately, Paul Biya refuses to accept the reality of his considerable failures and thrives on flattery and criminality. Ashu Nyenty must have been told this, so, human specimens like him are determined to create an alternate reality in which a war criminal and prolific embezzler is a blessing.

The values of journalism and the law which he purports to represent are being undermined by Paul Biya and he will pay a steep price for his moment of madness in that video.

There are countless lessons to be learned here, including uncomfortable questions about the quality of education and persons delivered from universities in Cameroon and the place of integrity and honesty in Cameroon’s public life. Ashu  Nyenty has become a public irritant with a mind foolishly immature and incapable of sound intellectual judgment.

Ashu Nyenty’s unashamed audacity is made more painful and pathetic because this is the time Cameroon needs men and women with brains and integrity. For a man with a PhD attached to his name, he is an embarrassment. He has tested the depth of the dangerous waters of the Cameroons with both feet, the price for his ignorance, provocation and stupidity is huge and he would pay sooner rather than later.