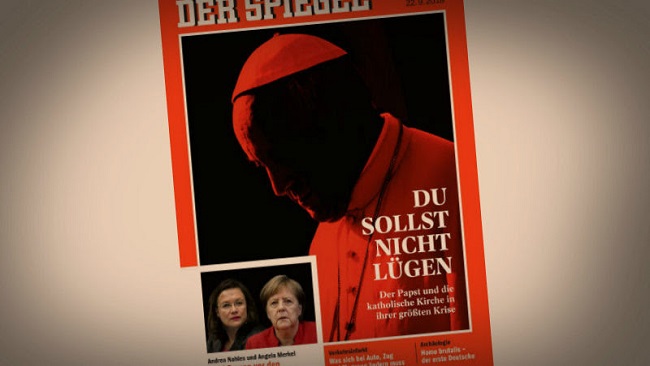 Prominent German magazine Der Spiegel has published a 19-page report criticising Pope Francis’s leadership of the Catholic Church and accusing him of ignoring abuse survivors in Argentina. Their cover story, titled “Thou shalt not lie” and subtitled “The silence of the shepherds”, attacks the Pope’s handling of the abuse crisis and his attempted Church reforms.

“Pope Francis promised when he took office a renewed, cosmopolitan Catholicism,” the magazine says. “Five-and-a-half years and many abuse cases later, the Universal Church is divided as never before.”

The magazine, which is generally regarded as left-liberal, is considered one of the most influential in Europe.

According to LifeSiteNews, its report covers cases such as that of Fr Inzoli, a convicted abuser laicised by Benedict XVI but restored to the priestly state by Pope Francis. Francis later laicised him again. It also examines the ongoing McCarrick scandal, and the members of the C9 council of cardinals who have faced allegations of covering up abuse.

On his handling of issues such as Communion for Protestant spouses and Communion for the divorced and remarried, De Spiegel says the Pope may “go down in history as the one who split the Church”.

The report most notably includes an interview with an abuse survivor from Argentina who says she was one of a group of victims who wrote to Francis shortly after his election, but never received a reply.

The woman, Julieta Añazco, says she was sexually abused by a priest when she was seven years old. She said that in 2013, shortly after Pope Francis was elected, she and 13 other victims wrote to him to describing what had happened.

They sent the letter by recorded delivery and, three weeks later, received a confirmation of receipt. However, they never received a reply.

The accused priest was subsequently transferred to a nursing home where he “continues to celebrate Mass”.

“During Bergoglio’s time as cardinal, many of the abuse victims in Buenos Aires had turned to him for help; nobody was permitted access to him,” the magazine says, adding that there are currently 62 trials in process against Argentine priests. “The number of their victims could be in the thousands.”

A legal defender for Argentine abuse survivors, Juan Pablo Gallego, says that Pope Francis is “now in exile in Rome – has found his refuge there, so to speak”. Gallego adds that in Argentina Francis faces “the suspicion that he protected for years rapists and abusers of children.”

He cites the example of Fr Julio César Grassi, who is now in prison for raping teenage boys. Francis had been Grassi’s confessor and ordered a legal report to defend Grassi against the charges.

Gallego says that in 2006 he had a conversation with the then Cardinal Bergoglio. “He was withdrawn and mistrusting, he said no word about the fact that the Church paid Grassi’s lawyers. The current image of an open, sympathetic Pope Francis does not fit the man whom I sat in front of at the time.”