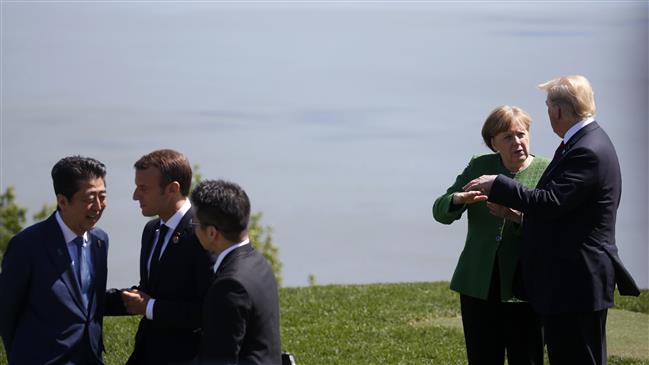 Disputes continue at G7 summit with remote possibility of success 0

Confrontation between the US and its traditional allies has continued at the 44th summit of the Group of Seven (G7), lowering expectations for a breakthrough at the talks.

Washington’s allies contradicted trade data provided by US President Donald Trump with different numbers, while Trump firmly maintained his position that Washington was at a disadvantage, Reuters cited an official who followed the talks as saying on Friday.

The Friday meeting in which the G7 allies were gearing up to confront the US president over trade tariffs had “some emotions,” but it maintained a diplomatic mood, the official, who spoke on condition of anonymity, added.

“The other leaders presented their numbers and Trump presented his. As expected he did not budge. This is probably not because he does not understand, but because of domestic reasons,” the official said.

“We are going to deal with the unfair trade practices. If you look at what Canada, and Mexico, the European Union – all of them – have been doing to us for many, many decades. We have to change it. And they understand it is going to happen,” Trump said.

During the first day of the two-day summit in the Canadian town of La Malbaie in Quebec, the US partners were angered by the US president’s recent decision to impose tariffs on steel and aluminum imports from Canada, the European Union and Mexico.

Trump has justified his move by arguing that US steel and aluminum producers are vital to national security and threatened by a global supply glut.

Canadian Foreign Minister Chrystia Freeland said on Friday that her country will not change its stance with regard to “illegal” US steel and aluminum tariffs.

Freeland said Canada will retaliate against Washington’s tariffs, adding that her country does not pose a national security threat to the US.

However, after a meeting with Canadian Prime Minister Justin Trudeau on the sidelines of the summit, Trump said progress has been made in trade talks with Canada.

According to a French official, German Chancellor Angela Merkel offered a proposal for resolving the dispute on Friday and other leaders strongly supported the idea.

The official described Merkel’s proposal as a “shared assessment and dialogue” mechanism, but did not provide any details.

However, observers say expectations for a breakthrough at the summit are low, contrary to the 42-year history of the summit which always saw all sides having consensus on key issues.

“It is highly unlikely there will be a final communiqué,” a G7 official said.

While Trump said G7 leaders would manage to agree on a joint statement, Merkel expressed doubt that the group could issue a final directive, noting that failure to do so would indicate the lack of agreement among the G7 member states.

UK Prime Minister Theresa May warned both the US and EU of the ramifications of retaliatory trade policies over tariffs, calling on both sides to focus on China’s excess steel production instead.

The summit comes a day after thousands of demonstrators staged rallies in Quebec City and burned US and British flags to protest against the world leaders’ gathering amid heavy riot police presence.