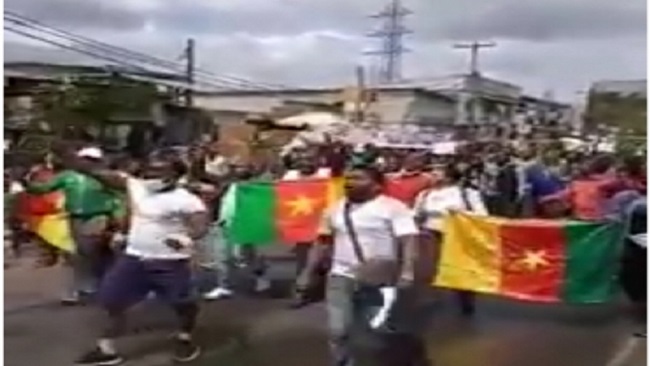 East Cameroon Demonstration: It can’t be a one off 0

Cameroon’s opposition leader, Professor Maurice Kamto, has been in the spotlight for two years now because of his determination to change the country’s political landscape by all means.

The country has been in the grip of a corrupt dictatorship for decades and bringing about change in such a political system will require massive efforts and determination.

Key among the tools that the country’s political opposition is using are peaceful public demonstrations which are acceptable in genuine democracies and Cameroon has been flaunting itself as an advanced democracy though political dissent is not tolerated.

On September 22, the political opposition led by Professor Kamto called on its supporters in the country to come out en masse to demonstrate against a regime noted for its corruption and intolerance.

The turnout was impressive, despite the violent response from the government.

From every indication, East Cameroonians are gradually plucking up courage to challenge a political system that has brought more poverty and corruption to a country and its population.

Cameroon is in deep waters and for close to four decades, it has been ruled by a crime syndicate that has made corruption its hallmark and it is not repentant about that.

Over the last 30 years, the country’s economy has been suffering and this unfortunate situation has been made worse by the government’s refusal to see political dialogue as a way out of the quagmire.

Cameroon is going through tough times. The people are sick and tired of the dictatorship and economic hardship brought onto them by a government that is not willing to mend its ways.

The impressive results posted by the country’s opposition on September 22 are a testament to the fact that if more Cameroonians join the effort, the outdated political system could be changed.

The odds are in the opposition’s favor. The government is cash-strapped and it is fighting many wars at the same time.

Its refusal to walk away from its old ways has left it in a permanent state of conflict. In the north, Boko Haram is making life very hard for everybody. The religious sect is killing both civilians and soldiers and the helpless population does not know where to turn to as the government itself is totally helpless.

But the government’s most uncomfortable nightmare is in the two English-speaking regions of the country where Southern Cameroonian separatists are hell-bent on achieving independence by force.

For four good years, the crime syndicate which passes off as a government has been pouring billions of dollars into the country’s two English-speaking regions but not for development purposes.

It has been battling an insurgency that might split the country if care is not taken. The fighting has already hit the country’s economy like a ton of bricks, leaving many young Cameroonians unemployed.

It has also generated many internally displaced persons and refugees. This situation is a real nightmare to the government that actually feels threatened.

Cameroonians must look at how other countries have achieved their political goals. Demonstrations to overthrow a deep-rooted dictatorship cannot be a one-off.

The hungry and desperate people of Cameroon must take to the streets every day until the dictator throws in his towel.

The people must understand that the government will not be going down without a fight and it will use all the means available to it to stay in power.

The people must not relent. They must understand that you cannot make omelet without breaking eggs.

Other countries have seen their dreams come true through their determined effort. Cameroonians can also chase this government away through collective action.

What is certain is that the government cannot kill or imprison everybody. This is a government that does not believe in genuine dialogue.

If it has to change its way, then it must be compelled, one way or the other, to come to the negotiating table for true and genuine discussions. The ball is in the court of Cameroonians and the opposition leaders. Nobody will solve these problems for Cameroonians. The brave people of Cameroon must learn how to take on a government whose cardinal objective is to exploit its own people.